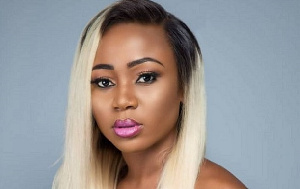 Entertainment critic, Chris Tsormanah has expressed joy in seeing social media personality Akuapem Poloo being dragged to court over the nude photo she took in front of her son and sharing the same on social media.

Chris Tsormanah said it was important for so-called celebrities to behave themselves, and stop using nudity to sell themselves.

Her action he added, was indecent and will forever affect the mental wellbeing of the son.

He argued social media has neutralized the values we hold as people that we need not lose track of.

“I am happy the case is in court. People will get to know that we cannot do things anyhow on social media,” he said on Rainbow Entertainment on Rainbow Radio 87.5Fm.

Actress, Rosemond Alade Brown aka Akuapem Poloo, who displayed her naked picture together with her son on social media has been granted bail by an Accra Circuit Court.

She has been charged with publication of obscene material, two counts of engaging in domestic violence but has pleaded not guilty.

The Court presided over by Mrs. Christiana Cann, has admitted Rosemond to bail in the sum of ¢100,000 with four sureties two to be justified with landed property worth ¢100,000.

The title deed of the property, the Court said, should be deposited at the court’s Registry pending the outcome of the matter.