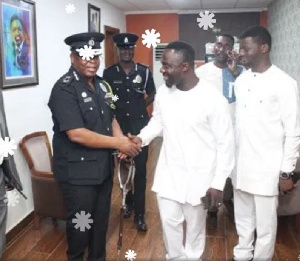 IGP interacting with personnel at the Parez Chapel International

The Inspector General of Police, James Oppong-Boanuh on New Year’s Eve led a police patrol team in Accra to energize men and women of the service who were on duty and to also reassure worshipers of their safety following reports of alleged terror attacks.

The Police Chief paid surprise visits to a number of churches that were keeping watch night to usher in the New Year where he interacted with some security men and leaders of the religious bodies to build their confidence that his outfit was up to the task.

Among places he visited include the Parez Chapel, Action Faith Chapel International, the Ridge Church, and the Independence Square where the International Central Gospel Church was holding its Cross over Service among others.

At the Parez Chapel in Dzorwulo, he interacted with elders of the Church and reassured them that there was adequate security to forestall any potential threat.

Ghana’s security services had earlier picked intelligence that some faceless persons were plotting a series of terror attacks on churches during 31st December all-night services.

As a result High ranking Ghanaian security sources including the army, the police and the Bureau of National Investigations (BNI) were placed on red alert to avert any security breaches.

The Ghana Police Service had earlier deployed over 15,000 police to maintain law and order during the Christmas festivities according to the Inspector General of Police himself.

He added that the number includes plain clothe personnel who have been deployed to various vantage points, particularly crime-prone areas to maintain law and order.

“We have intensified day and night patrols, increased community engagements and sensitization on security matters, deployed some technological devices to enhance information gathering, stepped-up traffic management, intelligence-led operations, snap checks and highway patrol”, he revealed while speaking at the Christmas Safety and Security Project organized by the Graphic Communications Group.

According to him, these interventions during the yuletide can only be effective if the Police receives the needed support from the general public adding that effective crime prevention and detection is anchored on shared responsibility between the Police and the public it serves.