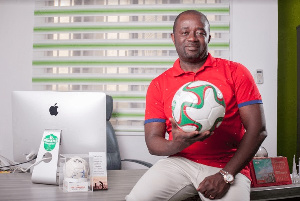 President of the Ghana Football Association, Kurt Okraku has reiterated his desire to lead the country to win the FIFA U-17 and U-20 World Cup.

His comment comes after the technical teams for the national teams were dissolved by the Executive Council of the country’s football governing body.

According to him, the Football Association needed a new direction to achieve their ambitions by seeing the Black Stars doing better in competitive matches and seeing the U-17 and U-20 teams win the FIFA World Cup.

“We know we have an assignment for the various national teams coming up but we [Executive Council] took the decision by dissolving the technical teams because we needed a new direction,” he told Joy FM.

“The Black Stars will play 2021 Africa Cup of Nations qualifiers in March. The Black Queens, the U-17 and U-20 also have an assignment but my desire is to see the Black Stars breaking the record by playing in the semifinals of the World Cup.

“I want to see the U-17 and U-20 winning the FIFA World Cup and you can’t do that without taking bold decisions,” he added.

The Black Stars became the first African country to play in the quarter-finals of the World Cup in South Africa in 2010.

However, in 2009, Sellas Tetteh led the Black Satellites to win the U-20 FIFA World Cup in Egypt.