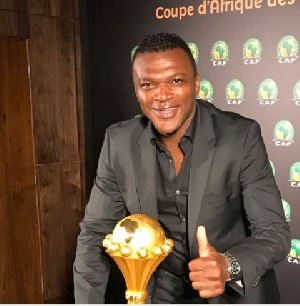 Former French international, Marcel Desailly has revealed that he suspected Ghana will struggle at the 2019 Africa Cup of Nations (AFCON) even before the tournament started.

At a tournament hosted in Egypt last year, the Black Stars only managed to reach the Round of 16 stages even though the side was touted as one of the favorites to lift the title.

In a conversation with Footballmadeinghana TV on Ghana’s campaign, Marcel Desailly has shared that it was very clear the West African side had problems before going into the tournament and he had a feeling it will affect the team’s performance.

“I knew that individually we were not strong enough to make the difference and perform but I was hoping that collectively we were going to be clever enough to play all together at the same time at our best level to be able to pull off a surprise but just a surprise, it could’ve not been something obvious from the beginning.

“I was having doubts, I was not fully convinced about the tactical set up that was put in place. He [kwesi Appiah] could’ve done better. He should’ve tried to protect less of the talented players he had, kill some of the egos to be able to have a group of players who might be less talented but ready for the battle. This is why I identified that Ghana was going to have some difficulties”, Desailly said.

At the Round of 16 stages, The Black Stars were knocked out on penalties after drawing 1-1 against Tunisia at the end of 90 minutes plus extra time.