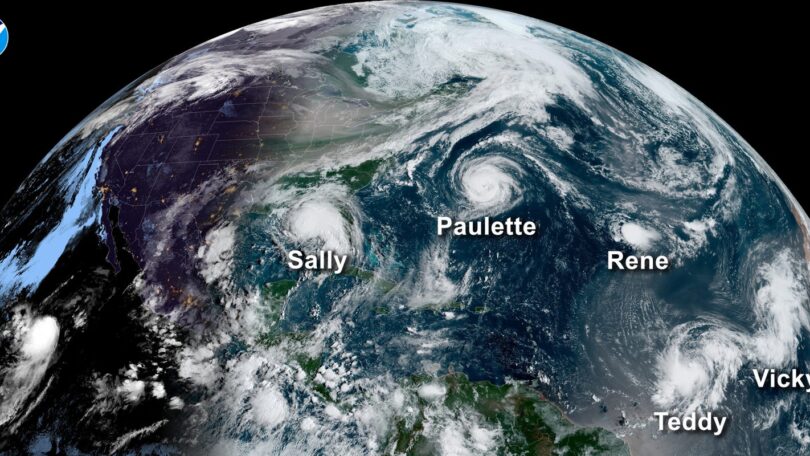 A breakdown of the Saffir-Simpson scale of hurricane intensity and expected damage for each category.

“I didn’t think I would live to see that, but it’s happened,” Penn State University meteorologist Michael Mann told USA TODAY, referring to the record number of named storms in a single season.

A typical season sees only 12 storms.

All preseason forecasts said an active season was likely, but none came close to the actual number. “Our group here at Penn State predicted an unusually active season, as many as 24 named storms – the most of any of the preseason predictions,” Mann said. “But even THIS wasn’t aggressive enough a forecast.”

It was the fifth consecutive season with above-normal activity, the National Oceanic and Atmospheric Administration said. There have been 18 above-normal seasons out of the past 26.

“I think really what stood out to me about 2020 was the extremely active late season,” said Colorado State University hurricane researcher Phil Klotzbach. “October and November were extremely active with seven storms and a whopping four major hurricanes (Delta, Epsilon, Eta and Iota).”

Before this year, Klotzbach said, no October-November had more than two major hurricane formations.

Although the official end of the hurricane season is Monday, storms can form in December. Meteorologists at the National Hurricane Center monitored a low-pressure area Sunday in the far eastern Atlantic Ocean for possible subtropical development. If the area becomes a named storm, it would be called Kappa, the 31st named storm of the season.

December tropical storms and hurricanes are exceedingly rare. “Only one season on record has had more than one named storm form in December, and that was all the way back in 1887,” Klotzbach said.

When will it end? When will this relentless Atlantic hurricane season finally end?

A major hurricane has wind speeds of at least 111 mph and reaches Category 3, 4 or 5 on the Saffir-Simpson Scale of Hurricane Intensity.

Eta and Iota smashed into Central America as Category 4 storms in November, leaving hundreds dead and widespread misery and destruction. Iota was briefly a Category 5 before weakening and hitting land as a Cat 4.

“One of the most notable features of 2020 was all of the intensifying (and often rapidly intensifying) hurricanes we had up until the point of landfall,” Klotzbach told USA TODAY. “Most notably for the United States, Hanna, Laura and Zeta all rapidly intensified in the 24 hours prior to landfall.”

A satellite image from Sept. 14 shows five tropical systems spinning in the Atlantic basin at one time. From left, Hurricane Sally in the Gulf of Mexico, Hurricane Paulette east of the Carolinas, the remnants of Tropical Storm Rene in the central Atlantic and Tropical Storms Teddy and Vicky in the eastern Atlantic. (Photo: NOAA)

Rapid intensification is typically defined to be a strengthening of 35+ mph in 24 hours. This season, several storms’ winds increased by as much as 50 mph or more in 24 hours.

The 2020 season began early when Arthur formed May 16. The extremely active season quickly went through the predetermined list of 21 names, ending with Wilfred on Sept. 18. Then for only the second time in history, the Greek alphabet was used for the remainder of the season as Alpha formed the same day. Nine Greek alphabet letters have been used, up to Iota.

Laura was the USA’s deadliest hurricane of the season. The storm killed at least 40 people after roaring into Louisiana on Aug. 27 with winds of 150 mph. It was also the most destructive, causing at least $14 billion in damage in the USA.

The causes of the active year, according to NOAA’s lead seasonal hurricane forecaster Gerry Bell, included warmer-than-average Atlantic sea-surface temperatures and a stronger west African monsoon, along with wind patterns coming off Africa that were more favorable for storm development.

La Niña, a natural cooling of ocean water in the Pacific that appeared this fall, is more hurricane-friendly because it reduces wind shear in the Atlantic, which works to crush budding tropical cyclones.

Penn State’s Mann said climate change played a role in the active year: “The main ingredient in our forecast was the unusual warmth of the tropical Atlantic Ocean, and the warmth of the oceans cannot be explained without taking into account the warming effect of increasing carbon dioxide concentrations in the atmosphere from fossil fuel burning.

“A warmer ocean surface appears to favor more storms, but as importantly, it means more energy to intensify tropical storms into major hurricanes, including Category 5 monsters like Iota,” he said.

Mann said that in recent years, as the world’s oceans have been at their warmest, “we’ve witnessed the strongest hurricanes on record, in both the Northern and Southern Hemispheres. And the seasonal window during which the oceans are warm enough to produce major hurricanes is expanding.”