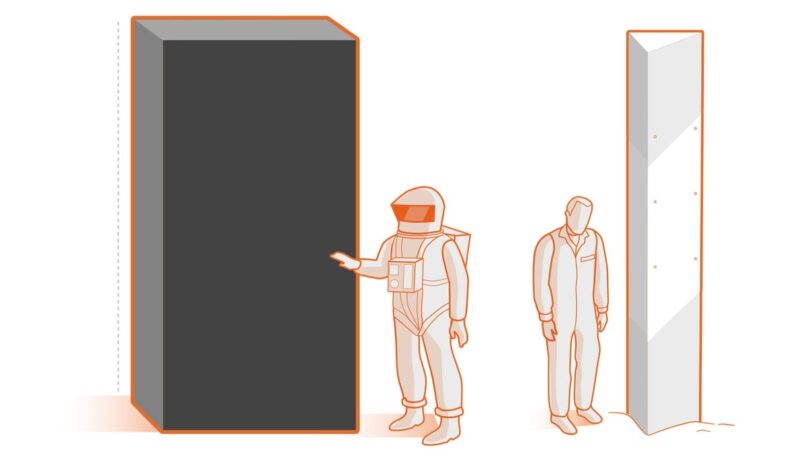 A gleaming three-sided metal column that received international attention after it was discovered embedded in Utah’s remote Red Rock Country has reportedly vanished without a trace.

The Bureau of Land Management reported the disappearance Saturday, making it clear that it was not the work of the federal agency that overseas public land.

“We have received credible reports that the illegally installed structure, referred to as the ‘monolith’ has been removed from Bureau of Land Management (BLM) public lands by an unknown party,” the agency said in its Facebook statement. “The BLM did not remove the structure which is considered private property.”

The case has been passed on to the local sheriff’s office, but they don’t have any earthly leads.

The 10 to 12-foot tall monolith discovered last week invited comparisons to the monolith made famous by filmmaker Stanley Kubrick in the movie “2001: A Space Odyssey.”

That black monolith makes multiple appearances in the 1968 movie — from the apparent dawn of man to a mission on the moon — and has given birth to a wide range of theories about Kubrick’s and author Arthur C. Clarke’s intent.

The stainless steel monolith has inspired many questions, too, since being discovered by the Department of Public Safety’s Aero Bureau and the Utah Division of Wildlife Resources on Nov. 18 while conducting a count of big horn sheep in a portion of southeastern Utah.

Where is the Utah monolith?

The Utah Department of Public Safety won’t disclose the exact location of the monolith, except that it’s in a difficult to access, barren canyon in Red Rock Country.

Red Rock is one of five hiking regions distinguished by the Utah Travel industry. The area is southern Utah canyon country, which includes all five of Utah’s national parks and many of its monuments and state parks.

The exact location of the installation was not disclosed in an effort to stop individuals from attempting to locate it, for fear visitors could potentially become stranded in a remote area.

But that didn’t stop David Surber, who started sharing video and images of the monolith to an unverified Instagram account Wednesday.

In a video tagged in Moab, Surber tested if the structure is magnetic and solid. “Hollow, riveted, not magnetic,” he said in the clip.

“As far as the timeline, for all we know, it could have been placed there 50, 60 years ago and because of the material it’s made out of it hasn’t weathered – it was meant not to. It’s definitely an interesting installation.”

Why people are comparing it to ‘2001: A Space Odyssey’

Just the restrained statement from the Utah Division of Wildlife Resources alone might serve as the opening to the next installment in the “2001” saga:

“While on this mission, they spotted an unusual object and landed nearby to investigate further. The crew members found a metal monolith installed in the ground in a remote area of red rock.”

There is something eerily similar between the Utah slot canyon and the spare landscapes in scenes where the “2001” monolith appears.

Early in the movie, it’s in an African plain where tribes of apes fight over meager vegetation for sustenance. Later, the monolith is discovered in a crater on the moon.

Check out this video to see how the two compare.

Workers with Utah’s Department of Public Safety discovered a giant hunk of metal in the Utah desert. They don’t know where it came from.

Not the first mysterious monolith

This isn’t the first unexplained monolith that’s appeared in the U.S. in recent years, including one that seems much more closely connected to Kubrick’s film.

On the eve of 2001, a steel monolith was discovered on “a windswept hilltop” in Seattle’s Warren Magnuson Park, according to the Los Angeles Times.

The monolith measured 1 foot by 4 feet by 9 feet — a tribute to the first three prime numbers squared and an understanding of mathematics, as described in Clarke’s book.

Three days after the monolith appeared in the park, it disappeared just as mysteriously.

With all the attention the Utah monolith has garnered in recent days, it might not be unreasonable to speculate that it might disappear — mysteriously or not.

The Utah Department of Public Safety statement reminds the public that it is illegal to install “structures or art without authorization on federally managed public lands, no matter what planet you’re from.”