Home » How to reconcile after a family rift 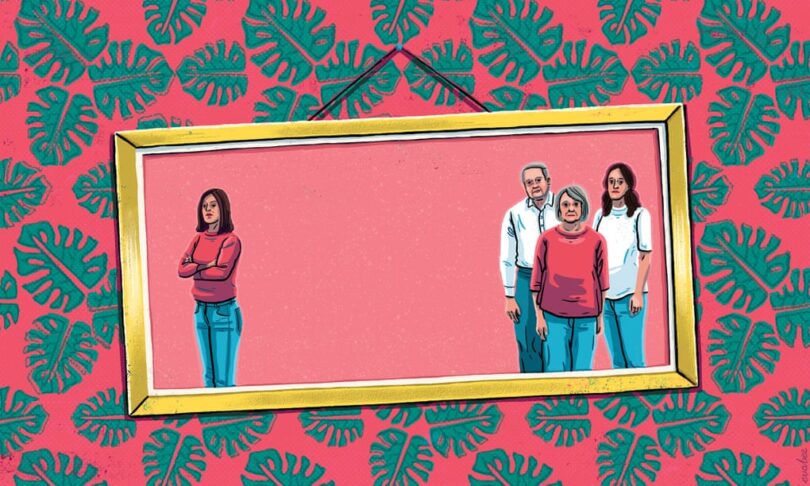 Harry and Meghan have apparently severed links with the royal family and moved halfway across the globe. Nicole Kidman has been allegedly snubbed by her two eldest Scientologist children. Angelina Jolie has a difficult relationship with her father Jon Voight – it probably doesn’t help that he’s Donald Trump’s favourite actor… We hear about these high-profile estrangements and assume it’s either media hype or that these family fallouts are unique to the rich and famous. But Karl A Pillemer, a professor of human development at Cornell University, says it’s actually rare to find a family that has never been touched by a deep and painful rift.

“Estrangement is strikingly and surprisingly common,” says Pillemer. He conducted a random survey of 1,340 individuals. He found that “more than a quarter reported that they themselves were estranged from a close family relative”. He defined that as having no contact with the relative whatsoever. The figure was much higher than he had anticipated. “For most of that 27% it was not a case that they had simply drifted apart, it was a significant estrangement about which they felt upset.”

There is also the phenomenon of “ambiguous loss”, where the person is psychologically present, but physically absent. “These powerful bonds of attachment to family members we grew up with don’t just go away,” says Pillemer. “You might stop speaking to a close family member but they’re still in your thoughts.”

Estrangement involves not just the loss of someone, but active rejection, which is one of the most stressful things a person can deal with. “It’s this triple whammy that makes it so hard to get over,” says Pillemer. “Then, the pain is compounded by the fact that people tend to ruminate on the rift.” One man who decided to call his brother after almost 25 years of separation said he woke the next morning and thought, “This is the first time in 25 years that I haven’t woken up and thought: ‘I haven’t spoken to my brother in more than two decades.”

In estrangement, it’s generally more painful to be the one who has been cut off. “There’s a sense of powerlessness,” Pillemer says. But he also found that even those who had instigated the split were usually plagued by a nagging sense that something was wrong or incomplete and they questioned whether they’d made the right decision.

It’s this phenomenon of “anticipated regret” that seems to be driving an unprecedented surge in people reaching out to reconcile in the pandemic. “I’ve been inundated with accounts from people of the estranged sibling who is suddenly back in a family Zoom call or email chain,” says Pillemer. “Many people who are in estrangements generally ruminate on whether they will regret doing this when it’s too late,” says Pillemer. “And the situation now, with older relatives especially, has made that possibility of anticipated regret much more acute. When you think of your time as limited you’re much more likely to take steps.” Research shows they are right to worry. People who have conflicted or estranged relationships generally do worse after a bereavement.

Another key trigger for resolution is when people recognise a family pattern they don’t want to repeat. “One woman told her son. ‘You should get on with your sister better.’ In response, he scoffed, ‘What, the way you are with your sister?” She called her later that week.”

Pillemer wanted to use his research to bring estrangement out of the shadows, but also to find out what advice reconcilers had for others who were in the same boat. He was surprised by the level of agreement among those who had managed to regain contact.

First: prepare. “Lay the groundwork and understand why you want to reconcile,” says Pillemer. A counsellor can be helpful, in this respect. Second, if you’re serious about mending a relationship you need to be willing to look at the part you played in the estrangement. “In most cases estrangement involves two parties and both played a role. Many people – often parents – say: ‘I’ve no idea what caused this.’ But you often find the child has detailed letters explaining exactly what the problem is.”

Causes of estrangement include choice of partner, the legacy of divorce, problematic in-laws, value differences and unmet expectations, as well as conflicts over money and inheritance. “It might have started with some issues in childhood and then there’s a divorce, or in adulthood there are value differences or issues around partner choices, which start a cascade where difficult communication becomes hostile, until someone says: ‘I’m done. It’s easier if we don’t have contact any more.’”

Whatever the cause, when a family is fractured it is a uniquely painful experience. “One of the most striking things was how shameful people found estrangement,” says Pillemer. In a society where people seem willing to broadcast almost anything on social media, estrangement still resides in the shadows. “Until they spoke to me, or one of our interviewers, most had discussed it with almost no one. So one of the strongest effects of estrangement is the extent to which people feel isolated, alone and ashamed, especially in parent/child estrangement and to a lesser degree for siblings.”

Estrangement is painful because it combines a number things that we humans find incredibly difficult, says Pillemer. First, there is prolonged uncertainty. “With estrangement people are left hanging. They don’t know the next step or if there will be one,” says Pillemer. “And if there’s one thing we like it’s certainty. Social studies show we often prefer a negative outcome to a prolonged period of not knowing.”

Many recommended letting sleeping dogs lie, rather than going over past grievances. When sisters Tamara and Leah reunited after a long estrangement they rejected the need to process past events. Leah told Pillemer: “I don’t remember either one of us apologising. We just started from the present.”

Of course not every relationship is worth saving. Pillemer is very clear that some relationships should never be rekindled, for example, where they are abusive, at least not without protection and professional help.

In most cases, however, people found even limited contact had its benefits. “They were able to continue processing the relationship, whereas if it was cut off, it was frozen in time,” says Pillemer. Of those who managed to re-establish contact, all said it had been worth it. “Over and over people said: ‘It’s a weight off my shoulders.’ Many said It was the hardest thing they’d ever done, but no one regretted it,” says Pillemer.

After the cut-off, reconcilers usually found that they were in a stronger position to negotiate the relationship on new terms. Sybil Okafor had always had a difficult relationship with her mother, who felt she could do or say anything regardless of how it might make her daughter feel. Okafor took the decision to cut her mother off when she was in her 20s and suffering a nervous breakdown, for which she was hospitalised. “Instead of being sympathetic and concerned, she believed I was just being selfish and immature. She actually came to the hospital and told me: ‘This is the stupidest thing I’ve ever heard. You’re faking!’

Okafor didn’t speak to her mother for several years, but eventually relented and offered her mother one more chance, but made it very clear the estrangement would start again if she reverted to her verbal abuse. “I could maintain boundaries with her because I had shown I would act if I needed to. So the estrangement really changed our relationship for the better.”

Even failed reconciliation attempts had a healing effect, as the research showed. “It was liberating even if it didn’t work out because at least they’d given it a try,” says Pillemer. “They lost the sense of anticipated regret and could make peace with the rift and move on. Even the party that had been cut off seemed to understand better why it had occurred and had more peace of mind.”

How to heal a rift

1. Accept your part in the estrangement. What things might you have done that helped cause it? Write about it. Try taking the other person’s point of view and write about past events from their perspective.

2. Don’t expect them to see your point of view. It’s not going to happen, at least not by issuing an ultimatum.

3. Don’t expect an apology. Figure out what’s the least you will be happy with and set clear boundaries on how their behaviour will need to change for you to engage in the relationship. Or, if you’re the one who has been cut off, be clear on how you will behave differently going forward. Be very specific about what this will look like. Avoid vague promises like: “I’ll be more respectful.” Respect means very different things to different people.

4. Don’t expect the other person to change. If you’re rebuffed keep the door open. Stay in contact with cards on birthdays and key holidays, that lets them know you’re still open to rekindling the relationship.