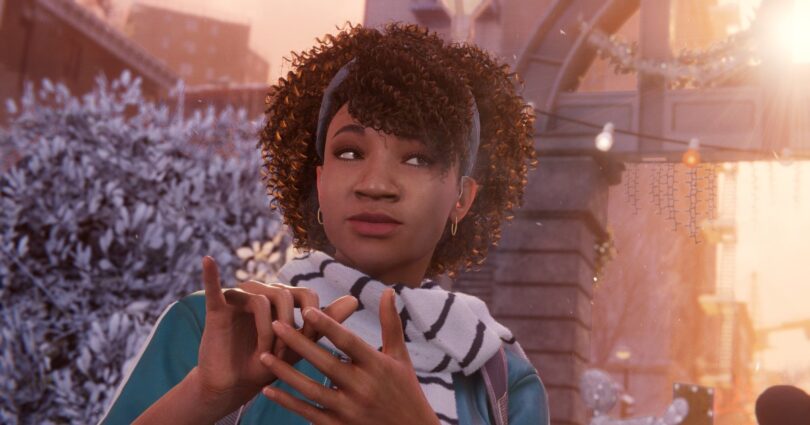 The world learned in 2018 that Miles Morales, one of the characters known as Spider-Man, is bilingual in the Oscar-winning animated film “Spider-Man: Into the Spider-Verse.”

His mom, Rio Morales, is Puerto Rican, so it makes sense that her son speaks Spanish.

A viral tweet introduced Spider-Man fans to the idea that Miles can sign — and to a new character in the Spider-Verse named Hailey Cooper.

Hailey, played by actress Natasha Ofili, is among the “next generation of Marvel’s New Yorkers.” East Harlem knows her as a skilled street artist and community organizer. She also happens to be deaf.

Marvel, it seems, is continuing its trend of featuring more inclusive characters after launching the “Marvel’s Avengers” game, starring a Muslim Pakistani teenager.

“Her deafness is an aspect of who she is, but it’s not what her story is about,” said Mary Kenney, the Insomniac Games writer behind Hailey’s character. “Her story is about what she wants to do for her community, and how she expresses that.”

Miles has grown into himself since the world saw him last. He has made friends in his new neighborhood, he’s taking a language course at Brooklyn Visions Academy (ASL; he already knows Spanish) and he’s just more… suave.

But still “he hesitates as he’s signing,” Kenney said. “He’s looking for signs. He spells out Hailey’s name because he doesn’t know her name sign yet. And it’s those touches that make it really feel real.”

In the now-viral scene in which Miles meets Hailey, he approaches her on a snowy New York City street.

“I’m Hailey,” she replies, using her name sign — an “X” handshape (the sign for spray paint) with a “Z” motion over the heart in a spray-painting motion. “Everyone’s calling you ‘our Spider-Man.’”

Ofili’s agent emailed her when the clip started to circulate on social media. The actress was thrilled to see herself as Hailey for the first time.

“I’m still in shock,” Ofiili recently told The Times over Zoom. (She speaks both ASL and English.) “I keep watching myself over and over, and I can’t believe this is real. And it looks like me. I’m still very honored and full of abundance.”

“This definitely was groundbreaking for our community, the Black deaf community, because they don’t see themselves represented on TV or anything,” she said of her “Spider-Man” role. “If they want to become anything they want, they can. Not that they have to be a video game character, but it could be anything: the sky is — there’s no limit.”

There’s a metaphor Ofili refers to often when explaining her community: it’s “last in the food chain,” she says.

“For so long, … the Black deaf community wanted people to look at us as human beings. We wanted them to see us like we actually have something to offer,” she said. “And we have a heart to give, whether it’s sadness, anger, happiness, whatever, we’re going to be authentic and raw with our true feelings.”

She thinks she can help convey that through Hailey, or on screen in other roles, such as her portrayal of Principal Karen Vaughn in Netflix’s “The Politician.”

In the same way that Vaughn is a principal, Hailey is an artist. Those are the characters’ identities; being deaf is an additional detail.

“Hailey Cooper, she’s a cool girl,” Ofili said. “She wants to go far. But she chooses to stay in the community because she wants to elevate and make sure the whole community elevates with her. Maybe she’ll leave, who knows, but I think her heart is there to continue the fight. She’s just a cool badass.”

The actress and the character share other personality traits too: Ofili describes them both as edgy and independent with a sometimes sassy style. But the character can also represent many of the multiple facets of Black deaf culture.

Hailey, she said, could be first-, second-, third- or fourth-generation. She represents Black deaf culture in her edge, swag and tenacity.

Bringing the character to the PlayStation 5 screen involved motion sensors and performance-capture acting. There were no traditional props or sets to speak of.

“Everything is all pretend, and I actually loved that process, because it was very challenging,” Ofili said. “But it was a good challenge because I’ve been able to be more creative and absorb the space as if you’re living in your head. … You go in and it’s just an empty room. It was amazing.”

The artist, who started off her career in the fashion industry, considers her work a combination of method and emotional acting. On set, she worked with Nadji Jeter, who plays Miles’ body and face, and TJ Fortson, who signs for Miles as his hands.

“Miles also uses ASL,” said Kenney, the game writer. “But he hasn’t used it his whole life. He hasn’t grown up with it the way Hailey has; he’s started to learn it. So [TJ], who plays Miles doing ASL, he took that into consideration. He’s not fluent, per se.”

Prior to filming, Insomniac met with a group of deaf-culture consultants, including actor Joshua Castille, to learn about signing and how to avoid common pitfalls of representing the deaf community in media.

“One of my favorite moments was Josh and Natasha and TJ sat down and read through [the script],” Kenney said. “And Josh said to me … ‘Hey, so this isn’t how a deaf person would say this.’ And I was like, ‘Cool, change it. We gotta make it right.’”

After Kenney decided to write a character who uses ASL, she reached out to the animation department to see if something like that was even possible. Capturing the motions of individual fingers in a video game had never really been done before.

“Sony was so excited. They were like, ‘We’re gonna have to invent new technology, but we’re ready,” Kenney said. “‘We’re gonna do it.’”

Brian Horton, the creative director at Insomniac Games, was on board every step of the way. His son learned ASL in school — just like Miles did. Horton emphasized accessibility: Subtitles automatically appear whenever a character is signing, and Insomniac also recorded Natasha narrating her lines in a vocal booth for players with low visibility.

“I’ll just say that the whole studio has been committed to allowing as many people as possible to play our games,” Horton said. “And I think you’re going to see this trend happening in games across the board.”