Home » How people fell in love again with Mahama at Winneba 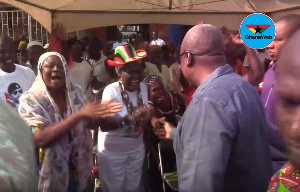 The heat is gradually building, it’s an election year and the quest for the ‘hot seat’ has begun. Flagbearers for the various parties have already began making subtle moves to garner the attention of grass root members and the general public.

Flagbearer of the National Democratic Congress, John Dramani Mahama did not fail to register his presence at Winneba Tuesday.

He had the love of the people of Winneba when he joined other party members and the party Founder, Jerry John Rawlings, to mark the 38th anniversary of the 31st December Coup d’état.

The show of love was enormous, with cheers emerging from the crowd for Mr. Mahama as he shook hands and interacted with the leaders and people of the township.

As president, John Mahama somewhat lost the confidence some Ghanaians vested in him as a result of his performance in some areas whilst in government.

Aside disappointment, sections of the public criticized the former President for overseeing corruption and doing very little to keep his appointees in check.