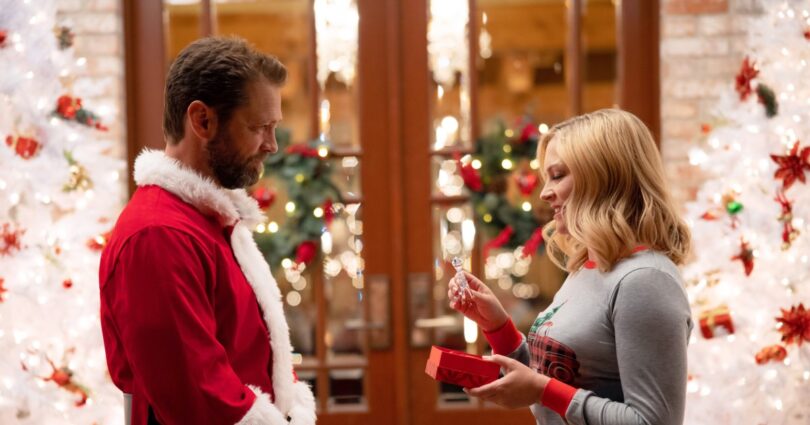 Conservative pundits frequently express concern about “the war on Christmas.” But what about a war for Christmas?

This winter, Hallmark Channel and its sister network, Hallmark Movies & Mysteries, are airing 40 new TV movies about Christmas and other events that fall in the final month of the year. During the same period, Lifetime is unwrapping 34 new releases. Meanwhile, sleigh bells are ringing and snow is glistening at OWN, Up, Netflix, Hulu, HBO Max and YouTube. Even Fox Nation is getting in on the act.

These films may not receive the same acclaim as the Oscar frontrunners, but they are ratings juggernauts that increasingly garner bigger budgets and bigger stars — sometimes using known talent frequently enough that performer and platform become synonymous: Think Holly Robinson Peete, who is starring in two Hallmark holiday movies this year — including “The Christmas Doctor,” which she executive produced — or Melissa Joan Hart, who stars in Lifetime’s “Dear Christmas” and directed the network’s “Feliz NaviDad.”

Hannah Pillemer, the executive vice president of development and production for MarVista Entertainment, says that when she started at the Westwood company eight years ago, holiday movies constituted about 10% of the development slate and that the genre was still thought to be what she calls “the film ghetto.”

Now, holiday films account for about 50% of MarVista’s projects. As more players, some with deeper wallets, enter the space, Pillemer says she’s seen “the appetite explode for this kind of content.” Her company has nine holiday TV movies airing in 2020.

A large part of these films’ success goes into the painstaking marketing that can be seen on, and off, screen.

Michelle Vicary, Hallmark’s executive vice president of programming, says, “When people come to watch a Hallmark Christmas movie, they’re coming for an experience … [of] positivity, of optimism, of a promise that after spending two hours with us, you’ll feel a little bit better about yourself and about the world and about your community and your family and friends.” She says that this translates to tangible items too, like Hallmark-branded blankets, socks, chocolates, wines, popcorn and Monopoly games.

“The Christmas Doctor’s” Peete says that, as an executive producer of that film and other Hallmark projects, the most substantial notes she gets from the network apply to costumes — Is her coat tied the right way? Does the color scheme match? — and about “decoration and decor and ‘Is there enough Christmas in the scene?’” By this, she means “either a soft focus in the background that indicates Christmas [or] a color sparkle.”

Pillemer says that she’s received notes from Hallmark executives on the types of plaid shirts that her male characters wear and how their hair is parted, and that the movie’s last kiss scene — which signifies the happily-ever-after at the end of the journey — must be shot in a specific way.

Lifetime too has a color palette it adheres to — including a shade, used in marketing materials, named Winter White in honor of Amy Winter, the channel’s head of programming. It also has branding tie-ins: This year, the network has partnered with vacation rental site Vrbo on a Connecticut rental home decorated to look as if it had popped out of a Christmas movie.

“It’s like getting the perfect gift. You have to have the right wrapping paper on it, right?” Winter says of the eye for detail applied to Lifetime’s films. “We just want to make sure that people absolutely know what they’re getting out of each of the Christmas movies.”

While some channels are more fastidious than others, Pillemer says that each has its “little fun quirks.” She says Hallmark and Lifetime require that Christmas be part of the story of their holiday movies — “not just that there’s lights and trees in the background, but that you actually have a character going through a transformation that could only happen at Christmas.” For BET, she says, it’s about “the family coming home for the holidays, being together [and] going on a journey of self-discovery.”

At Netflix, which has the luxury of a more relaxed release schedule, “what we don’t do is try to jam it all in there,” says Tendo Nagenda, one of the streaming giant’s vice presidents of film. He also says “we look holistically … [at] what’s the offering and then what might we bring that’s unique. So we might not have a Christmas title film next year.”

Fellow vice president of film Ian Bricke says that while “these are movies that are meant to satisfy,” the company “also wants to give them a little elevation — give them a twist or shoot in beautiful locations.”

As it adheres to these criteria, the genre is also pushing back against the stereotype that all holiday movies have the same predictable plot.

“A few years back, there would be a bakery in every movie,” laughs Tanya Lopez, Lifetime’s head of movies. Now, she says, “I’m really working to dispel those tropes and those stereotypes that, I think, had become very easy” — though, of course, “the endings are still going to be happy.”

Networks are also pushing to diversify the casts of their holiday slates, as well as the behind-the-scenes creatives making them.

In addition to its Dolly Parton musical, “Christmas on the Square,” and “The Christmas Chronicles 2,” a sequel to the popular 2018 family film starring Kurt Russell and Goldie Hawn as Mr. and Mrs. Claus, Netflix has released the splashy musical fantasy “Jingle Jangle: A Christmas Journey.” Written and directed by David E. Talbert, it comes with show-stopping dance numbers and features a cast made up predominantly of performers of color, including Forest Whitaker, Ricky Martin and Keegan-Michael Key. Although it was originally intended for a theatrical release, Hulu is airing “Happiest Season,” a LGBTQ-themed story centering on a couple played by Kristen Stewart and Mackenzie Davis. It’s directed by Clea DuVall, who wrote the script with the film’s costar, Mary Holland.

Lifetime has titles like “A Sugar & Spice Holiday,” written by Eirene Donohue and directed by Jennifer Liao, which follows a Chinese American woman (Jacky Lai) who draws on her family’s cultural traditions to spice up a cooking competition. There’s also the MarVista-produced “The Christmas Setup,” Lifetime’s first LGBTQ-led original holiday film. Helmed by out director Pat Mills, it stars real-life married couple Ben Lewis and Blake Lee as characters pushed together by one’s needling mother (played by Fran Drescher). Hallmark’s “The Christmas House” is the channel’s first holiday film to feature a gay couple (played by Jonathan Bennett and Brad Harder).

“I find with these Christmas movies that there’s a very distinctive architecture to the movie, to the storytelling,” says Michael J. Murray, the out screenwriter for “The Christmas Setup” and a host of other holiday films. “It’s like a haiku. You can play with the words, but at the end of the day, you’ve got to adhere to the structure and the form.”

And yet, despite the focus on Christmas, these movies are usually not overtly religious.

“I think the best of the Christmas movies are nondenominational,” Murray says.

He will, occasionally, write in characters with a religious connection, like an Episcopal priest in Lifetime’s 2018 film “Christmas Around the Corner.” But he mentions “It’s a Wonderful Life,” one of the mainstream movies most synonymous with the holiday, because in that film “the bigger questions are about life and death and a life well spent.”

“Sometimes, for me, I’d rather have those scenes propel my story than the deep and specifically religious themes,” Murray says.

There’s also the push-pull of the titles themselves. How many opportunities are there to use “Christmas” as an adjective?

MarVista’s Pillemer requires her team to have catchy titles when they pitch projects, “and if they don’t have a good title, they have to go back and think about it before they bring it back.” She says they’ll scour books, poems and songs to come up with original ideas and build concepts off of those. She’s particularly proud of a film that will go into production next year, “All Is Bright.” It’s about a light decorating competition.

This year, the COVID-19 pandemic has also affected the battle for seasonal supremacy. Due to factors like weather, scheduling and the need to deliver this many presents to rom-com lovers in time for Christmas, holiday movies were some of the first to start production after the spring shutdown. Stars like Ali Stroker and Daniel di Tomasso of Lifetime’s “Christmas Ever After” were fabricating falling in love around Plexiglas. “The Christmas Setup’s” Lee and Lewis were brought in, in part, because they were quarantining together. In “Feliz NaviDad,” reindeer lawn decorations appear with masks as a wink to the current predicament. “Dear Christmas” has only six speaking parts, and the background performers are played by crew members.

But the pandemic might also be a boon to the films’ viewership.

“These Christmas movies are going to be really important this year,” says screenwriter Murray. “They’re going to have to be a substitute for many of us not having our families around.”