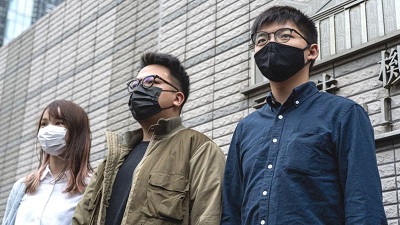 The trio had been found guilty of unlawful assembly.

The pro-democracy movement has been stifled since Beijing introduced a controversial security law with harsh punishments.

But as their offences took place before the law’s enactment, the activists have avoided a potential life sentence.

Wong has received a sentence of 13.5 months in jail, while Chow and Lam will be imprisoned for 10 and seven months respectively.

The activists were remanded in custody until today’s sentencing, with Wong placed in solitary confinement.

All three were found guilty of organising and taking part in an unauthorised assembly near the police’s headquarters at the start of the pro-democracy protests in June last year.

“Immediate imprisonment is the only appropriate option.”

Chow is said to have burst into tears when the sentence was read out. Meanwhile Wong shouted “the days ahead will be tough but we will hang in there” as he was led away, according to reports.

In comments posted on Twitter via his lawyers, Wong added: “We’re now joining the battle in prison along with many brave protestors [sic], less visible yet essential in the fight for democracy and freedom for HK.”

Rights group Amnesty International condemned the ruling, saying it was a way for authorities to “send a warning to anyone who dares to openly criticise the government that they could be next.”

“These three activists have been jailed in violation of their rights to freedom of expression and peaceful assembly,” said Amnesty International’s Asia-Pacific regional director Yamini Mishra.

“Prosecution decisions must be fair and impartial. Rights and freedoms in Hong Kong must be upheld.”

All three of them first rose to prominence as activists in the 2014 “Umbrella Movement” pro-democracy protests. Wong and Chow were still in their teens when they became student leaders.

One of the city’s most recognisable dissidents, Wong has been a key figure in Hong Kong’s pro-democracy efforts for years and has served several shorter prison sentences previously. -AFP