Home » Hiltzik: Will the U.S. lose its COVID-19 vaccine investment? 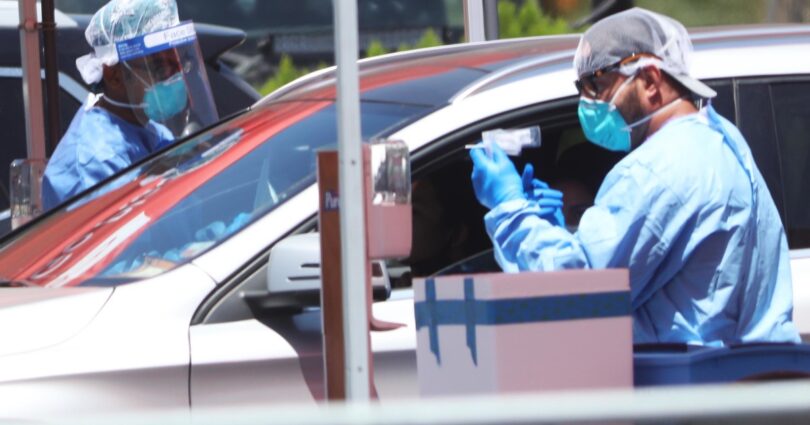 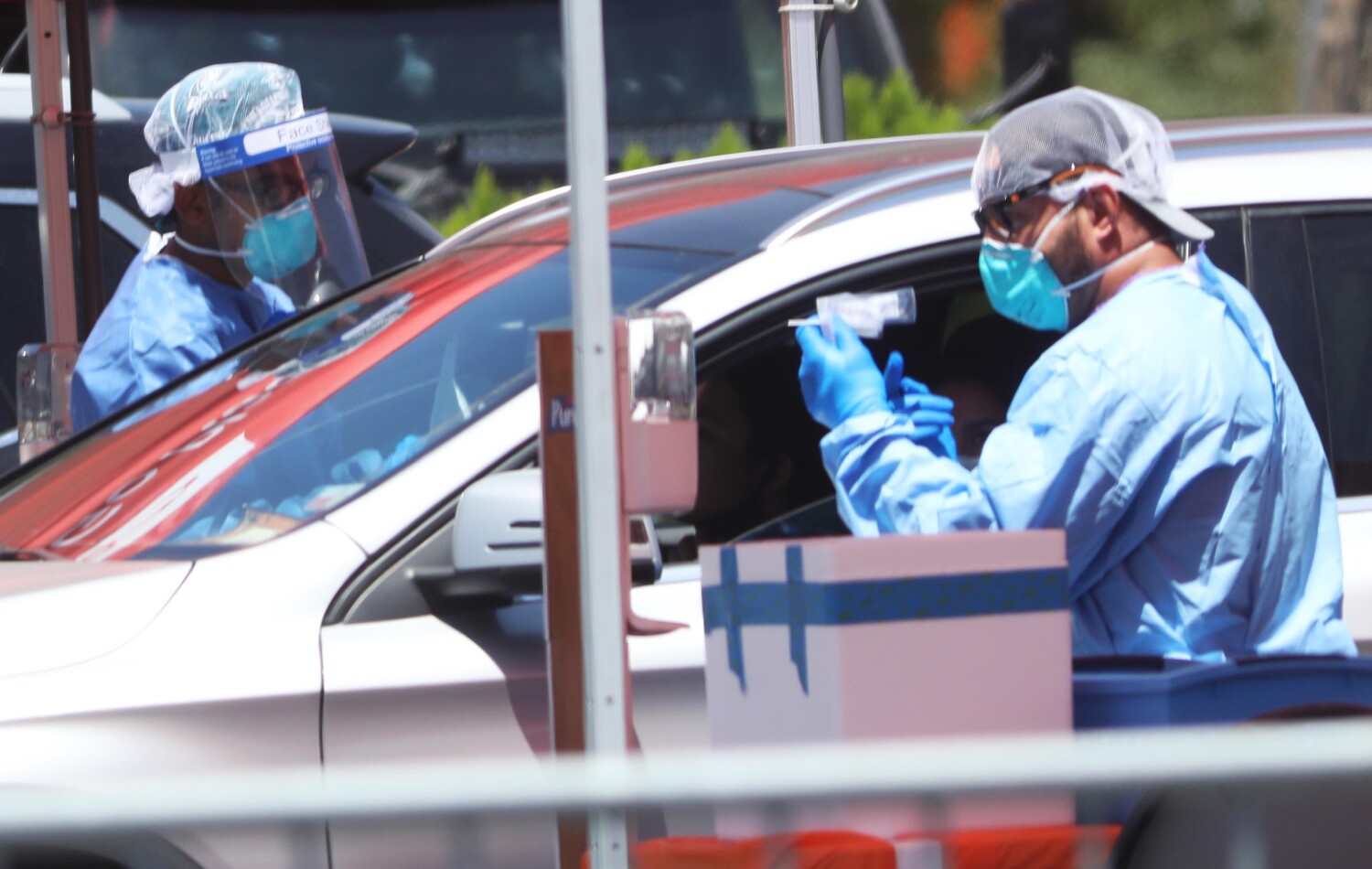 The biotech company Moderna injected a new dose of optimism into the fight against COVID-19 on Monday by announcing that its vaccine candidate had shown a success rate of 94.5% in clinical trials.

The announcement, however, raises new questions about how a successful vaccine will be distributed to the public — how fast, how broadly and at what price?

That’s especially relevant for the Moderna vaccine because federal funding of the company’s effort approaches $1 billion, and because the government owns at least one patent crucial for the product’s manufacture.

Moderna retains worldwide rights to develop and commercialize mRNA-1273…Moderna will realize all the profits from our COVID-19 vaccine.

Despite that, Moderna remains in control of manufacturing rights to the product, formally designated mRNA-1273, from which it’s expecting to record blockbuster profits.

“I believe that if we launch mRNA-1273, we will exit the COVID pandemic crisis in a unique position,” Moderna Chief Executive Stephane Bancel told investors after the release of the company’s third-quarter earnings Oct. 29.

“Moderna retains worldwide rights to develop and commercialize mRNA-1273,” Bancel said. “Without a corporate partner, Moderna will realize all the profits from our COVID-19 vaccine…. We should have a unique cash position at the end of 2021.” The company estimates the potential profits in the billions of dollars.

That suggests that Moderna doesn’t expect the U.S. government to exploit its own rights to the vaccine. That’s an old story in the pharmaceutical industry, which has profited from billions of dollars in government scientific research without returning much, if anything, to the taxpayers.

This mismatch is likely to become the topic of more bitterness if the drug industry hampers efforts to roll out COVID-19 cures globally. The potential damage to the fight against COVID-19 may already be visible on the horizon.

“One way we have considerably slowed the global timetable,” says Peter Maybarduk, director of the Access to Medicines program at the advocacy group Public Citizen, “is by giving grants to companies and asking them to develop manufacturing arrangements that are in their interest rather than pooling resources and saying we’re going to teach the world how to make these vaccines and using all the available manufacturing capacity.”

The issue is relevant to more than merely Moderna’s vaccine candidate. Pfizer, which has also developed a promising vaccine based on a technology similar to Moderna’s, has said it declined funding from a key government vaccine development program. But the company has received a $1.95-billion government contract to manufacture 100 million doses of its product if it’s proved effective.

The Moderna and Pfizer vaccines use messenger-RNA to instruct human cells on how to create antibodies for the virus that causes COVID-19.

Both Moderna and Pfizer, along with other drug companies, have benefited from government investments in basic science in the form of grants to university and other academic scientists.

Indeed, funding from the National Institutes of Health underwrote “published research associated with every one of the 210 new drugs approved by the Food and Drug Administration from 2010-2016,” according to a 2018 survey by scholars at Bentley University in Waltham, Mass. The survey estimated that some $100 billion in government grants funded basic research that drug companies built upon to develop their products.

How taxpayers should share in the profits generated by this work has been pondered by decision-makers for decades. The so-called Bayh-Dole Act, enacted in 1980, allowed some firms and nonprofit organizations with federal contracts to retain rights in products developed with federal funding and allowed federal agencies to grant exclusive rights to patents owned by the government.

The issue also arose in relation to California’s stem cell program, which was initially funded with $3 billion from a state bond issue — and will receive an additional $5.5-billion infusion with the passing of Proposition 14 this month.

The creation of the program, formally known as the California Institute for Regenerative Medicine, was originally sold to voters in 2004 with the promise that taxpayers would share in profits from stem cell-based medical advances. But how that sharing would be achieved was not spelled out in detail, and in any case no CIRM research has yet reached the commercialization stage.

The Bayh-Dole Act gives the government “march-in” rights allowing it to grant licenses to federally funded patents if it believes the corporate patent holders aren’t acting in the public interest.

But the government has never used its march-in authority. The attorneys general of 32 states, the District of Columbia and Guam asked NIH in August to exercise its march-in rights on remdesivir, a product of Gilead Sciences apparently useful in treating COVID-19. The petition stated that Gilead was unable to guarantee an adequate supply of the drug and had set a price of $3,200 per treatment.

Gilead has opposed the petition, however, and NIH hasn’t acted. “The government has been very hesitant over the years to use those rights with regard to matters of pricing,” Maybarduk told me. “The government should be much more assertive.”

The government’s rights over the mRNA vaccines may derive in part from its ownership of at least one patent and possibly two. The patent applications were filed by researchers at NIH in partnership with researchers at the University of Texas, Scripps Research Institute and Dartmouth College.

Moderna has been heavily financed by the federal government. The company has received $955 million from the Biomedical Advanced Research and Development Authority, or BARDA, and the government’s Operation Warp Speed to develop its product and for a clinical trial that produced the results announced Monday.

We’ve asked Moderna to comment but haven’t heard back. Bancel, speaking about the vaccine development, did acknowledge on the Oct. 29 conference call that “we didn’t do it alone. We had many partners.” He mentioned, among others, the NIH and BARDA.

Despite that federal contribution, Moderna remains in full control of its manufacturing program. The company says it is working out contracts with government agencies around the world to provide vaccines to middle- and low-income countries at prices lower than those in developed or high-income countries, but Bancel declined during the call to talk specifically about prices.

Such private arrangements, Maybarduk argues, “are slowing us down and limiting the science and limiting our ability to respond to the global pandemic.”

The public debate over the vaccines, he says, “is all about how best to ration a limited supply. But it doesn’t need to be that limited, if the U.S. government, with its massive power, were to organize a moonshot, bring together industry and universities and say we’re going to share this technology and increase our manufacturing capacity to get humanity through the pandemic more quickly. That would be an excellent way for the Biden administration to restore global leadership for the U.S.”