Home » He’s a Republican, a Wall Street financier, and a supporter of ‘Medicare for all’ 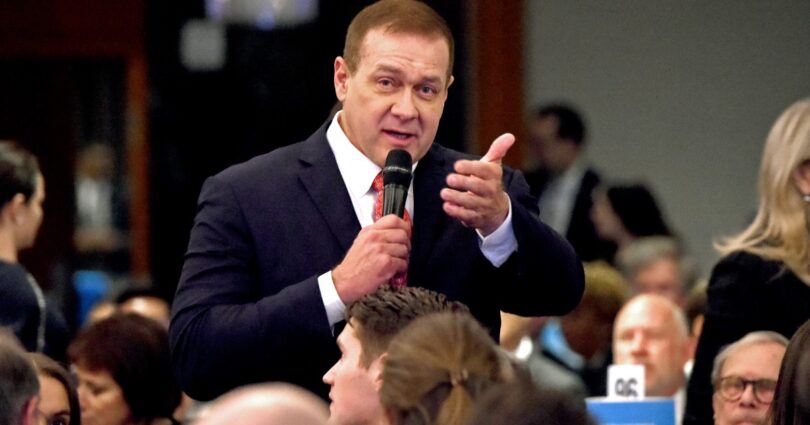 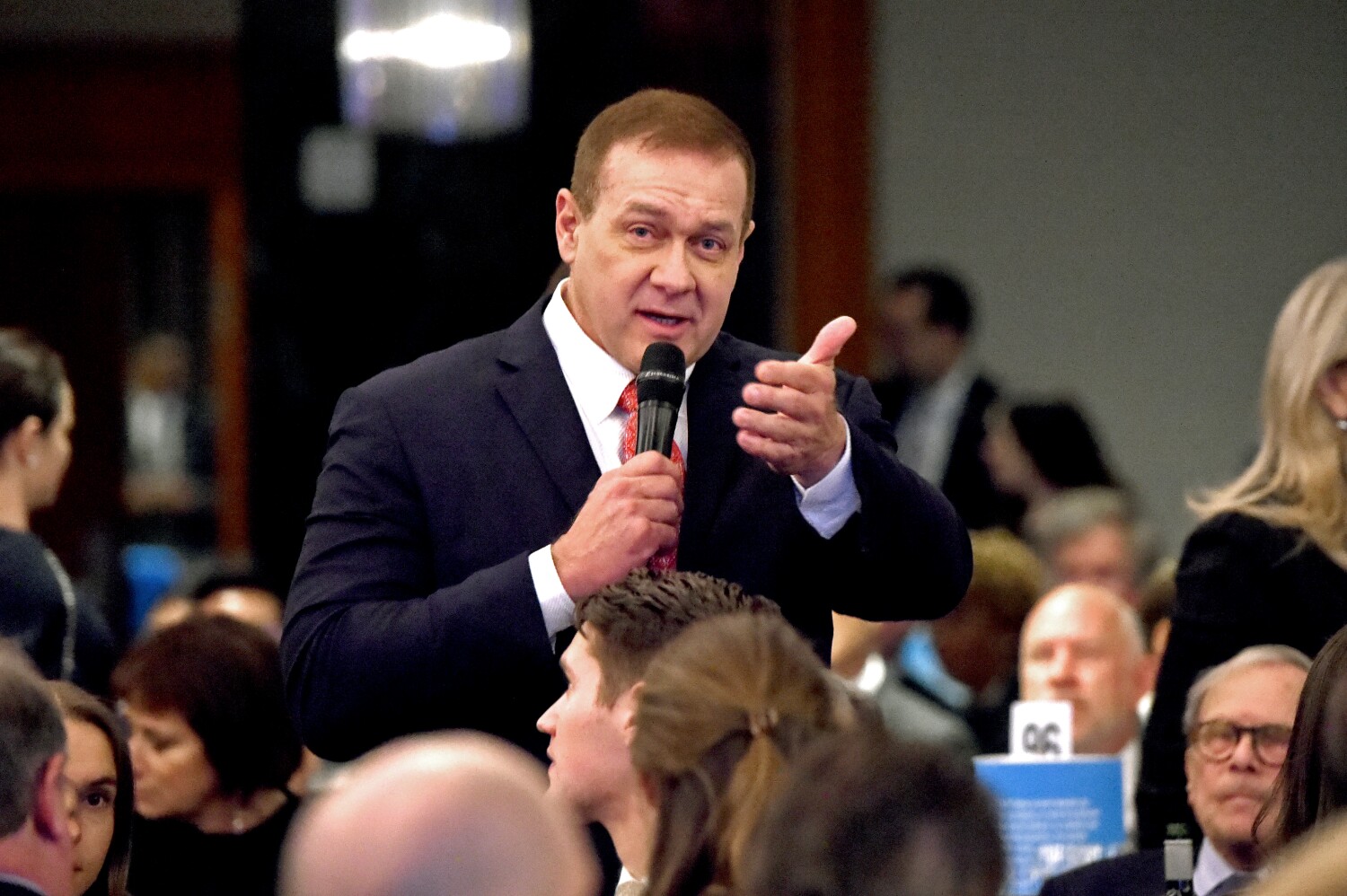 When it comes to money managers, Scott Minerd is unconventional. After stops at Merrill Lynch, Morgan Stanley and other big financial firms, the Wharton grad left Wall Street behind at 37 and moved to Los Angeles to enjoy, he says, a better lifestyle and pursue other business opportunities. He found one soon enough. Minerd joined what would become Guggenheim Partners — a familiar name in Los Angeles because the financial services firm’s chief executive, Mark Walter, owns a piece of the Dodgers.

Working out of an office in Santa Monica that overlooks the ocean, Minerd, 61, is Guggenheim’s chief investment officer, overseeing more than $233 billion of assets under management. His investment acumen has turned him into a Wall Street commentator — but he’s also a bodybuilder and evangelical Christian whose perspectives on topics such as income inequality, the Green New Deal and the social safety net don’t necessarily jibe with what you’d expect from a Republican investor. Minerd recently spoke to Times editorial staffers. His comments were edited and condensed for space and clarity.

The stock market is booming, yet the unemployment numbers don’t look good. Have we seen the worst of the damage?

The worst is yet to come for Main Street. A lot of jobs in retailing are never going to return. We had way too much square footage in retail space relative to our population. There are other small and medium-sized enterprises that are just not going to come back. As a reminder, more than 50% of all employment in the United States is in small- and medium-sized enterprises. What’s going to happen here is we are going to create a structural underclass that is either chronically unemployed or is employed at wages substantially lower than the wage they were employed at prior to the downturn. This is just going to continue to exacerbate the long-term trend that we’ve had of wealth and income inequality.

Why are you so certain of that?

If you look at the level of output in our economy today and you go back to a little over a year ago, where we were at this level of output before, the unemployment rate today is meaningfully higher than what the unemployment rate was at that time, like more than two times. That’s showing you that businesses have focused on becoming more efficient and more productive — that with consumers buying more stuff online you don’t need as many people working.

Do you place much stock in the gig economy, such as working for Uber, in providing some relief?

A large percentage of these people are doing it to supplement their income, and if you actually figure it out, which most people don’t, or at least I don’t think the average person understands, is that the amount these people are earning is the equivalent of probably like the depreciation and service of their automobile. So if you are unemployed, or you are marginally employed, and you need income and you’d like to monetize the value of your automobile by being a driver, it’s a great way to turn your asset into cash. That doesn’t really sound like a fair economic deal to me.

How did you vote on Prop. 22, which exempted gig transportation companies such as Uber from classifying workers as employees, rather than independent contractors?

Since you’re a Republican and overseer of the Hoover Institution, which largely opposes federal government solutions to societal problems, I am curious what your friends think about your opinions.

They can’t refute the conservative foundation and logic on which my policy beliefs are built. All of my best friends, with few exceptions, voted for Trump for one of two reasons: because they didn’t want their taxes increased, or they’re from the evangelical community and they think they will help advance evangelical issues. So I guess the point I am trying to make is that the real message that we get here is that the majority of these people are opposed to sort of heavy-handed government policies and broad tax increases. I understand that view, and I think there is some very good merit to it. However, I do understand also that a lot of things that we need to get done cost money, and so i think to bridge the conservatives and the liberals there are a number of broad-based ideas.

Can you give an example?

I had dinner with President Obama when he was still president, and I said if you could be king for a day and you got to do whatever you wanted, what would you do? One of the first things he said is: I would implement a carbon tax, and I would get rid of the national gas tax. And he said, “Here is the reason, Scott: Oil is not the vilest offender, there are other offenders who are vile and so a carbon tax would be an incentive to basically either get the largest contributors to carbon emissions to modify their behavior or it would just put them out of business.” You know, George Bush supported the idea of a carbon tax. That’s something that I think is a way to help start bridging the gap.

What about the Green New Deal?

I think I’m gonna have my conservative friends throwing rocks at me here, but the Green New Deal is actually not such a bad idea. Now, the thing is, I don’t necessarily agree with the form in which it’s being proposed, but it is essentially addressing these climate issues in a way to actually increase efficiency [and] economic output. Why shouldn’t we encourage people from where I grew up, in western Pennsylvania, which was all about steel and coal; why shouldn’t we be working with them to integrate them into the development or manufacture of solar panels or windmills? Why aren’t we saying we want to exploit the underemployed labor in the region to lift them out of this poverty and help it become a vital and growing part of the new economy. So something like the Green New Deal could actually be something that is very good for the people who have supported Trump.

So what do you mean then by saying you don’t support it in the way it’s being proposed?

Generally they’re talking about a lot of government programs, which I am not in favor of. There is no such thing as a temporary government program. The thing I am in favor of is a series of tax incentives. I was in Davos, and I was on a panel with Al Gore … and as I pointed out to Vice President Gore, “This is just an inconvenient truth. Until we have economic incentives behind these initiatives, we are not going to get them implemented fast enough to make a difference.”

What about the question of providing more access to affordable healthcare through something like “Medicare for all”?

In terms of Medicare for all, what is the problem, people? I don’t get it. If you get to a certain age or are at a certain income level and you can’t afford your healthcare, I don’t see an issue about having Medicare for all. Again, I’ll probably get somebody at the Hoover Institution throwing rocks at me for that comment. I think that, in a society like ours, a social safety net is necessary.

As opposed to universal income, I would favor Milton Friedman’s idea of a negative income tax. You are given some amount of money every year to provide essentially a basic wage, and if you get a job, for every dollar you earn you give back some amount, like 50 cents, or you forego some amount, which incentivizes people to seek ways to increase their income and encourages them to increase or improve their skills in different areas, and that sort of ties into job training and education.

I went to undergraduate school at the University of Pennsylvania. When I went there, it was a ghetto. We sat in a building that was cinder block with a brick face on it with linoleum tiles on the floors and these wooden paddle desks. The last time I went to Wharton, it was the frickin’ Taj Mahal — marble sidewalks, the whole shebang. I am picking my alma mater to pick on so I don’t pick on somebody else’s. These schools have huge endowments, and why are they not focusing their endowment on advancing a cause of essentially free education or at least education that provides complete support for people below certain income levels? I think it’s a travesty. I honestly won’t give money to the school, because I don’t want to see it going to bricks and mortar and making the place look better when people who would be qualified to come there can’t afford to do it. And, of course, if we had more equal access to education, it would help address some of the issues around race and poverty.

It’s expected that a Biden administration will revisit the Trump tax cuts. Any thoughts on that?

I was the economic advisor for Howard Schultz in his attempt to run for president. One of the things we discussed was the corporate tax cuts that the current administration put through, and I made the case to Howard that it was a great idea because it encouraged investment and so on and so forth over time — which I now sort of recant because it encouraged stock buybacks and dividends.

So are you saying we should hike corporate taxes?

The thing that Howard said to me that I thought was very interesting, and I totally bought into it, is if we are going to give a tax cut to a corporate America, what did we get back for it? Why do companies that don’t offer health insurance pay the same tax rate as companies that do? It doesn’t make sense. I think that government policy can be used as a tool to address issues like this. You want to keep your corporate tax rate? Condition it on providing healthcare for your employees, providing tuition assistance, providing job training, providing diversity. So you can have your tax cut, but we only want the tax cut to be for companies that are being responsible.

How would any of this stuff you are talking about be possible with a divided government?

I would hope that both sides would recognize there are compromises and bridges to be built here that can actually work for both of them and support their agendas. While they might not get fully what they want, they can get a lot of what they want.