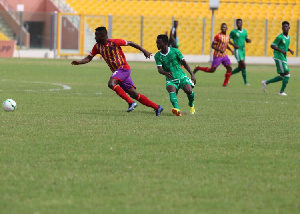 Hearts of Oak settled for a point as they were held to a 1-1 draw by Elmina Sharks in the Ghana Premier League on Sunday.

Dennis Mensah stunned the Phobians with the opener for the visitors but Kofi Kordzi equalised shortly after in the matchweek 12 fixture at the Accra Sports Stadium.

Hearts sit ninth on the league table, two places and one point below Sharks.

Berekum Chelsea have moved to tie with Aduana Stars at the top of the log after a 4-2 thrashing of King Faisal at home at the Golden City Park.

Ashanti Gold, who are tied with third-placed Asante Kotoko on 21 points, suffered a humiliation at the hands of Wafa, who registered a 6-1 win on the day.

At the Carl Reindorf Park in Dansoman, Elvis Kyei Baffour’s 65th-minute strike spurred Liberty Professionals to a 1-0 home victory over second-from-bottom Karela United. The Scientific Soccer Lads have moved to 10th on the log.

In Cape Coast, Ebusua Dwarfs, third from bottom of the table, were held to a 0-0 draw by visiting Inter Allies, who occupy the 11th position.

Medeama will host Great Olympics in the last game of matchweek 12 on Monday.