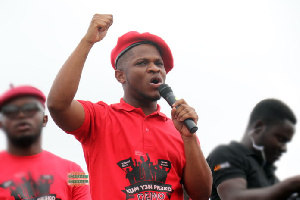 The “mediocre” and “heartless” government of President Nana Akufo-Addo and the New Patriotic Party (NPP) is “toying” with the lives of Ghanaians by deliberately refusing to distribute the 275 ambulances procured with taxpayers’ money because they want to wait until a few months to the December 2020 polls to release them to make a political statement, the main opposition National Democratic Congress (NDC) has claimed in a statement signed by its National Communication Officer Mr Sammy Gyamfi.

Just two days ago, the National Ambulance Service, through the Ministry of Health, wrote to President Nana Akufo-Addo imploring him not to releases the ambulances since, according to them, some technical issues, such as the fixing of tracking devices among others, were yet to be done.

President Akufo-Addo had announced at his encounter with the media in mid-December last year that he intended releasing the ambulances on Monday, 6 January 2020 but that did not happen due to the pleas of the Ambulance Service.

In the view of the NDC, however, the Akufo-Addo government is just playing games.

“Like many discerning minds, it is now clear to us that that the several conflicting excuses of the government on this matter are contrived and deliberately calculated to conceal the real intention of the government in this matter; which is to delay the distribution of the ambulances until a few months to the 2020 general elections for cheap electoral gain”, the statement claimed as captured in full below:

The National Democratic Congress (NDC) notes with great concern the refusal of the Akufo-Addo government to release ambulances procured with taxpayers’ money for their intended purpose.

These ambulances, some of which were imported into the country some four (4) months ago, have been lying idle at the forecourt of the State House despite a groundswell of public outcry that they be released.

In spite of genuine calls for these ambulances to be distributed to complement the country’s challenged National Ambulance Service and emergency health system, the vehicles are still parked at the State House amidst a litany of lies that crumble under scrutiny almost every day.

It would be recalled that following public condemnation of the continuous detention of the ambulances last year, the Minister of Special Development Initiatives, Hawa Koomson told the public that the Akufo-Addo government was in the process of training drivers, paramedics and other staff to operate the ambulances, hence the undue delay in distributing the ambulances.

The Vice-President, Dr Mahamudu Bawumia, is also on record to have said that the ambulances required digitisation.

But these flimsy excuses, alongside other cock and bull stories from the stables of government, were later to be amended by President Akufo-Addo. In an answer to a question about the ambulances at his last media encounter, President Akufo-Addo confessed that he refused a request from the Minister of Special Development Initiatives to release the first batch of ambulances with the excuse of wanting to ensure an even distribution of same so as to avoid accusations of favouritism against his government.

The NDC is not surprised by these never-ending excuses, which only typify the deception, insensitivity and leadership paralysis that Ghanaians are being subjected to by inept President Akufo-Addo and his wasteful government. Indeed, the government’s heartless handling of this ambulance fiasco so far, underscores the fact that President Akufo-Addo has very little regard for the lives of Ghanaians, particularly considering the snobbish remarks by the Minister of Special Development Initiatives, Hawa Koomson that Ghanaians were already dying before the ambulances were procured.

Even more bizarre are the new reasons given recently by the National Ambulance Service, which curiously was routed through the Ministry of Health and not the Ministry of Special Initiatives. The claim that two weeks is required to label 307 ambulances, some of which have been in the country since September last year is preposterous, to say the least.

Like many discerning minds, it is now clear to us that that the several conflicting excuses of the government on this matter are contrived and deliberately calculated to conceal the real intention of the government in this matter; which is to delay the distribution of the ambulances until a few months to the 2020 general elections for cheap electoral gain.

As we mark Constitution Day today, in honour of the adoption of the 1992 Constitution of the Fourth Republic of Ghana, we wish to remind President Akufo-Addo of his constitutional duty under Article 36(1) to take all necessary action to secure the maximum welfare of every person in Ghana.

The NDC joins the media and well-meaning Ghanaians to demand the immediate release of the ambulances to help address the health needs of Ghanaians, with whose taxes these ambulances were procured.

President Akufo-Addo and his government must stop toying with precious lives and release the ambulances without further delay.

Ghanaians deserve better than this mediocrity and insensitivity.