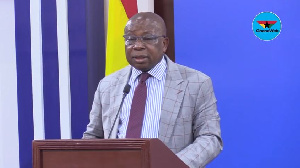 The Ministry of Health is pleading for the postponement of the commissioning of the ambulances that have been parked at the State House in Accra.

In a letter to the President, sector Minister, Kwaku Agyemang-Manu claims that he is ‘adding his voice’ to the demands by the National Ambulance Service for the distribution of the ambulances to the various constituencies to be put on hold.

“I forward to you a letter from the management of the National Ambulance Service making a request for the postponement of the Commissioning of the new ambulances. Having engaged them and listened to the reasons for the request for the postponement, I would like to add my voice for their request to be granted”, parts of the letter from the Health Minister to the President read.

For the National Ambulance Service, its appeal to have the commissioning halted from the scheduled January 6, 2020 date is to critically assess and conclude technical issues regarding the deployment of the ambulances for effective and efficient emergency response.

“This request has become very necessary due to the fact that the following important technical issues need to be completely addressed before the ambulances can be commissioned and dispatched to the various constituencies to ensure efficient and effective responses suffered some delay due to unforeseen circumstances.”