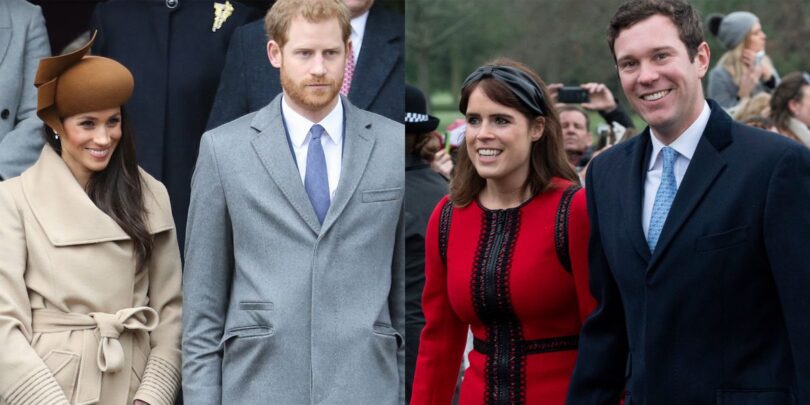 In a lovely gesture, the Duke and Duchess of Sussex are allowing Princess Eugenie and her husband Jack to live in their Frogmore Cottage home. Prince Harry and Meghan bought a Montecito home this July after months spent in Canada and at Tyler Perry’s L.A. home following their decision to step back as senior members of the royal family to lead a more private life.

A source close to the Sussexes shared with ELLE.com that “Frogmore Cottage continues to be The Duke and Duchess of Sussex’s residence in the U.K. and they are delighted to be able to open up their home to Princess Eugenie and Jack as they start their own family. ”

Eugenie is Prince Harry’s first cousin and she and her husband Jack Brooksbank recently announced they’re expecting their first child. The couple had been living at Ivy Cottage at Kensington Palace.

ELLE.com has learned Prince Harry and Meghan have not moved out of Frogmore and will stay at their home with Eugenie and Jack when visiting the U.K. The arrangements were all discussed with the family in advance.

Harry and Meghan moved into Frogmore Cottage in April 2019 shortly before the birth of their son Archie Harrison. In September, the Sussexes reimbursed the renovation costs for Frogmore Cottage in full—and estimate to be just in excess of $3 million. Initially, the couple were going to reimburse the costs in installments but made the payment in order to be financially independent.

At the time, Buckingham Palace issued a statement: “A contribution has been made to the Sovereign Grant by the Duke of Sussex. This contribution as originally offered by Prince Harry has fully covered the necessary renovation costs of Frogmore Cottage, a property of Her Majesty The Queen, and will remain the U.K. residence of the Duke and his family.”

The Duke and Duchess of Sussex have always been exceptionally close to Jack and Princess Eugenie, with the couple spending time with Harry and Meghan in the early days of Harry and Meghan’s relationship—long before the public was even aware.

Windsor Castle also has special sentimental meaning for Eugenie and Jack. Eugenie grew up at Royal Lodge with her parents Prince Andrew and Sarah Ferguson, and nearby Windsor Castle was the site of her wedding.

A Buckingham Palace spokesman shared with ELLE.com that “Frogmore is the U.K. home of the Duke and Duchess of Sussex. Any questions on it are for them.”

Carolyn Durand
Carolyn Durand is a royal contributor for ELLE.com and Oprah.com who has covered the royal family for more than 15 years.