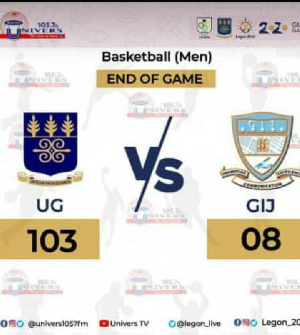 The 26th edition of the Ghana Universities Sports Association (GUSA) Games got underway on Sunday, January 5, 2020, as three disciplines took centre stage on day one.

The three disciplines were Tennis, Basketball and Football with participating schools battling against each other at the University of Ghana in Legon.

In the male category, debutants Ghana Institute of Journalism (GIJ) suffered a devastating 80-17 defeat against the University of Cape Coast (UCC).

Ghana Institute of Management and Public Administration (GIMPA) suffered a similar fate at the hands of Kwame Nkrumah University of Science and Technology (KNUST).

For the female category, UCC was awarded the victory due to UPSA’s inability to show up early.

Below are the full results:

The first game was the women singles between University of Ghana’s Priscilla Dosoo and Theodora Boateng University of Professional Studies Priscilla got the better of Theodora with a 6:0 and 6:1 win in the first and second sets respectively.

University of Professionals Studies after losing to the University of Ghana in the women singles suffered their second defeat in tennis.

This time, in the men’s singles, as they fell against the University of Cape Coast. Emmanuel Plange beat Donald Datsomor 6:0 in two to cement a place in the quarterfinals.

The University of Health and Allied Science needed 5-4 penalties victory to overcome Ghana Institute of Journalism after the game ended goalless in regulation time.

The games will continue on Monday after the opening ceremony. Disciplines expected to take place include football, basketball, volleyball and beach volley.