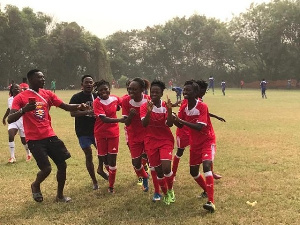 The games are being hosted by the University of Ghana, Legon and saw participating schools taking part in nine disciplines on Tuesday, January 7, 2019.

A total of six games were played in both men and women categories. In the men’s category, the standout game was the clash between the University of Ghana (UG) and the Ghana Institute of Management and Public Administration (GIMPA). This was termed as a local derby as both schools find themselves in the same city, Accra. UG won the bragging rights after totally outclassing GIMPA to record a 133-40 victory.

The University of Cape Coast scored an impressive 142-20 win against UDS.

Kwame Nkrumah University of Science and Technology (KNUST) also won in the male category alongside the University of Education, Winneba (UEW)

In the football, University of Ghana (UG) women’s team stole the show as an impressive performance saw them record a thumping 5-0 victory over University of Professional Studies, Accra (UPSA).

Another big scoreline on the day was recorded in the men’s match between the University of Energy and Natural Resources (UENR) and Ghana Institute of Management and Public Administration (GIMPA). UENR won 8-0.

Only two games were played on Tuesday. The University of Ghana (UG) were beaten 32-26 by University of Education Winneba (UEW) and then University of Cape Coast (UCC) recorded a 67-24 victory against Kwame Nkrumah University of Science and Technology (KNUST).

The games continue on Wednesday, January 8 with Athletics being the main attraction.