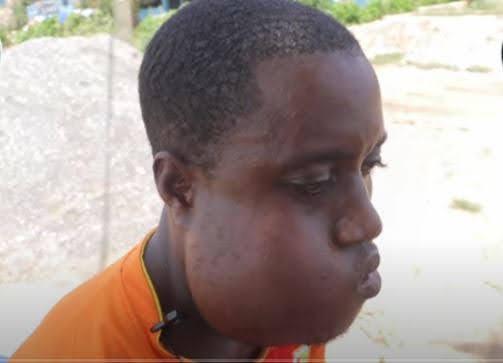 A Non-Governmental Organisation, Crime Check Foundation (CCF) has presented GH¢6,500.00 to a gum tumour victim, Daniel Ameyaw as initial payment for his surgery.

The support, made possible through six of its group donors, was to enable doctors to start the processes as soon as possible as the Foundation counts on the benevolence of individuals and organisations to complete the payment.

Mr Ameyaw, receiving the money, expressed appreciation to the Management of CCF and its donors and partners for the support.

Narrating his predicament, the distressed young man said a boil sprouted in his gum, which made it swell and that eventually developed to affect his jaw causing it to enlarge.

He said initially, he thought it was toothache but when he went to the hospital, doctors diagnosed him of gum tumour, which could only be treated through surgery.

“I experience agonising pain when the tumour bleeds and stinking fluid oozes out of it through my mouth. Because of that l was dismissed from work,” he said.

The seemingly helpless young man said because of financial difficulties, he had to go and live with his friend for support and upkeep.

He said his efforts to seek medical care had been fruitless as the cost of the surgery increased due to the severity of the ailment.

He said because of the abuse and the mockery that he was subjected to by neighbours he thought of committing suicide to end his struggles.

Initially, when he went to the hospital, the doctors said the surgery would cost GH4,000.00, which he could afford, but anytime he visited the facility the cost went up, he said.

“Now, the last time I visited they say they will need GH¢12,000.00 before they will attend to me surgically,” he added.