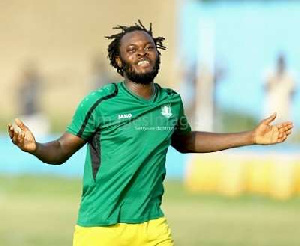 Great Olympics are seeking their first win of the campaign when they host Aduana Stars in the Ghana Premier League on Sunday.

The match day 2 fixture is scheduled to kick off at the Accra Sports Stadium at 3pm.

‘Oly Dade’ will be looking to bounce back in front of their home crowd after their 3-0 thrashing at the hands of AshantiGold in Obuasi on opening day.

The Premier League returnees need to get a win in order to avoid the relegation dogfight in the early stages of the season.

The visitors will start the match as the bookmakers favorite both on current form and head to head record.

Aduana have won three and drawn one out of the four games played against Accra Great Olympics.

The Ogya boys currently sit on top of the league with three points, same as seven teams but with superior goal difference while Olympics are languishing in 17th position.

Both coaches have the compliment of their full squads ahead of the mouthwatering clash.

The Ogya boys can once again count on striker Yaya Mohammed to continue his scoring form after his sensational hattrick against the Capelli boys on match day one.

Much of Olympics’ hopes will ride on the shoulders of Emmanuel Clottey and Godfred Saka who can pose a genuine threat to any opposition of their day.