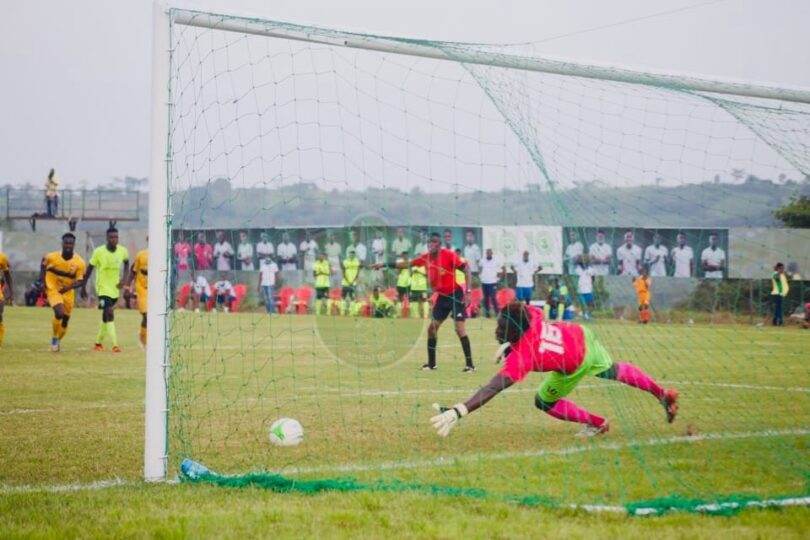 “We are not very impressed with the referees. What they did here was very bad and we don’t like that.”

These were the words of Medeama SC left back Patrick Yeboah after their 2-1 defeat to Dreams FC.

Yeboah was infuriated and kept receiving slight nudges from his coach Samuel Boadu whenever he criticised the referee.

It could be one of two things, Boadu was probing Yeboah to prevent him from getting into trouble or maybe, the defeat was due to Medeama’s poor performance rather than poor officiating.

The moment of controversy came at the death when Joseph Esso was fouled in the box. After a few seconds of deliberation, the referee awarded the penalty which Ibrahim Issah converted to give Dreams FC all three points.

Prior to that, it had been all Dreams from the onset. The Still Believe Lads came off the blocks with more intensity and were duly rewarded when summer signing Joseph Esso opened his account with a well struck effort.

Coach Karim Zito’s men kept the intensity and had a number of opportunities to double their lead but poor decision making let the Dawu-based side down.

Medeama came into the second half a much stronger side as they started to enjoy a bit more possession.

Second half substitute Kwadwo Asamoah restored parity with his first touch, just 60 seconds after coming on.

Before the match, 50% of matches between the two sides had ended in stalemates, and it looked the case until Dreams got a penalty which was converted by Issah.

Despite losing a number of attackers in the transfer window, Medeama were touted as a team which could challenge for the title this season.

The return of Justice Blay alongside other midfield options such as Rashid Nortey, Richard Boadu and Eric Kwakwa made Medeama’s midfield one to keep an eye on.

So far, Medeama have been uninspiring, especially in the middle of the park. The midfield has failed to dominate any of the two games against Great Olympics and Dreams.

At the Theatre of Dreams, the striking force looked disjointed as the team failed to create any attacking opportunities in the first half.

Coach of the side, Boadu attributed that to the lack of play time between his new players.

“We just began the season, so it will take time for my new strikers to gel,” he said.

As expected, every new team needs time to understand each other. However, time is never on the side of teams who challenge for the title. The reason title contenders are seprated from the rest is because the start well and peel away from the pile.

That hasn’t been the case so far for Medeama after picking one point in two games.

Boadu says: “There is nothing wrong the poor because as we know we went down with Covid and we are now preparing to come up strongly.

Certainly, if a team supposed to challenge for the title are now preparing to stamp their authority, then it might be a little too late when they get within their mojo to make a title push.

Dreams FC failed to score in nine out of 15 games last season as the team amassed just 10 goals.

In the season opener against Inter Allies, the Still Believe boys dominated and should have won the game if they took their chances.

Coach Zito says “his team should have scored beaten Inter Allies by so many goals last week,” and then goes on to address the goal scoring issues.

With Amadu and Esso also missing key chances. At times, it almost looks nonchalant as the players overcomplicate chances, failing to keep it simple.

The front four of Emmanuel Ocran, Boateng, Esso and Huzaif looks like a work in progress with potential. Once they start taking their chances, Dreams can become a team to watch this season.