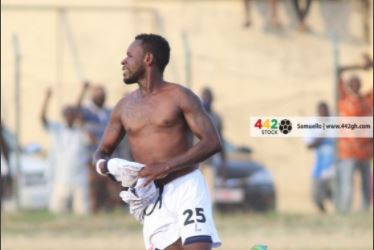 Kotoko failed to secure their first win of the season after conceding a late goal against Berekum Chelsea as Great Olympics stayed top of the league thanks to an impressive home win against Legon Cities.

Below is the wrap:

Great Olympics are top of the league after an exceptional performance which saw them batter Legon Cities 3-0 in Accra on Friday night.

Gladson Awako, who was named man of the match, scored the first goal after his free-kick deflected kindly into the net. Maxwell Quaye made it two from the penalty spot before Samuel Ashie Quaye sealed the win with a fantastic strike.

Legon Cities terminated the contract of their coach Goran Barjaktarevic 24 hours after the defeat.

Earlier on Friday, a goal in each half earned Eleven Wonders a deserved home win against Ebusua Dwarfs.

Mohammed Nortey Tetteh scored a penalty in the first half with substitute Prince Okraku netting in 90th minute. The striker’s second goal of the season after scoring against Kotoko on matchday one.

On Saturday, WAFA – the only team to win on opening day of the season – tasted defeat in Bechem.

The Academy Boys were beaten 1-0 by Bechem United. The decisive moment of the game came in the 28th minute when Hafiz Konkoni headed home from close range.

The Porcupine Warriors were course for their first win of the season following a first-half strike by Kwame Poku, his second goal of the campaign.

But Clottey, a former Ghana international, grabbed the equaliser for the home side with a powerful strike from a free-kick close to the box.

A late penalty by Ibrahim Issah helped Dreams FC down Medeama in Dawu.

But Dreams were rewarded with a penalty with few minutes to end proceedings. Issah made no mistake from 12 yards.

Their star man Diwiase Taylor socred the only goal of the game in the 76th minute.

Yahaya Mohammed scored in his first game of the season but it was not enough for Aduana Stars, who drew 1-1 with King Faisal in Techiman.

Aduana, whose opening match against Hearts of Oak was cancelled due to Covid-19, took the lead courtesy their talisman, Yahaya Mohammed.

But Boateng Frimpong snatched a point for the home side.

Sharks scored first through Benjamin Tweneboah and looked confident of winning the match but with 20 minutes to go, they were reduced to 10 men as defender Dennis Mensah received a second yellow card.

Liberty took advantage and scored in the 90th minute.

*The last game of the matchday will be played on Tuesday. Hearts of Oak welcoming AshantiGold to the Accra Sports Stadium.