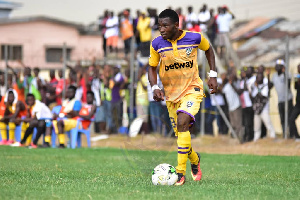 Medeama SC attacker Isaac Agyenim Boateng remains confident that Hearts of Oak will fall when they visit Tarkwa this weekend to face the Mauves and Yellows.

4th placed Medeama SC got their season off to a flying start when they recorded a statement-making 3-1 away with against Dwarfs in Cape Coast. Hearts, on the other hand, were dealt a painful blow by Berekum Chelsea who edged out the Phobians at the Accra Sports stadium.

Ahead of Sunday’s home fixture against Hearts of Oak, Agyenim Boateng is adamant his side will inflict more pain on the visitors.

“We (Medeama SC) as a team have set for ourselves a target this season, which is to finish at least in the top 4 and we believe having the best start will be helpful…we, therefore, want to win all our earlier games and the Hearts of Oak encounter is no exception,” he told footballmadeinghana.com

“I am very confident that we will do more than our last game against Dwarfs and we will claim all 3 points against Hearts of Oak” the left-footed dazzler continued.

The game will represent the first for Medeama SC at the Akoon Park owing to ongoing works to upgrade their TNA Park facility.

He insists the team is never under pressure to make a mark in their home bow in the league.

“We are not under any pressure or whatsoever to play well and win on Sunday. Our fans should be rest assured of a much-improved performance from the Dwarfs game and we promise to meet their expectations…but we want them to show up in their numbers and fill the stadium to capacity” he remarked.