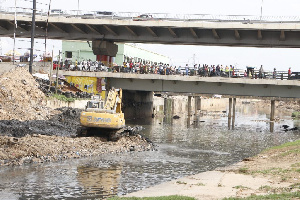 The Minister of Works and Housing, Samuel Atta Akyea says the government is working around the clock to complete some ongoing drainage works in the country before heavy rains begin from May.

He said the need to complete those projects to mitigate floods had become more pressing following the notice by the Ghana Meteorological Agency that more rains should be expected this year.

He told journalists after an inspection of drainage projects in Accra yesterday that financial constraints had been a major challenge but his outfit was “pushing” the Ministry of Finance to release some money soon.

For instance, he said the contractor that had been tasked to further desilt the Odaw River, which is a major contributor to floods in Accra when full, was owed $14 million.

The tour was to ascertain the conditions of the drains ahead of the rains.

The minister was accompanied by officials of the Hydrological Services Department who explained the progress of the projects.

Located at areas including Asylum Down, Weija GICCEL Estate, Mallam, Santa Maria, Tetegu and Abeka, the drainage, under the 2018 Emergency National Flood Control Programme (ENFCP), were at various stages of completion.

According to Mr Akyea, other drains were being widened and desilted to avert the floods while progress was expected to be made on all 44 drainage projects under the ENFCP.

He said actual work on the $200million World Bank Greater Accra Resilient and Integrated Development Project which would tackle flood challenges with the Odaw River would begin in December.

Admitting that “We have serious challenges with money. It takes good money to do proper drainage system,” he suggested that the country should consider seeking funds from the Bond market.

Commenting on the buildings on waterways as pertaining to GICCEL estate, Mr Akyea faulted the Local Government for looking on for such practice to continue despite its negative impact on the entire society.

“The local government system is not working enough. The assemblies must be up and doing,” he said.

He expressed concern about the negative attitude towards sanitation in the country and urged the assemblies to prosecute sanitation offenders to serve as deterrent to others.

He urged the public to support the efforts by the government to prevent floods by desilting their gutters and undertaking more communal work.

At Santa Maria, the head of drainage at the Hydrological Services department, Seth Kudzordzi said some structures had been earmarked for demolition to pave way for the continuation.

Generally, he said the ongoing projects had already brought relief to residents.