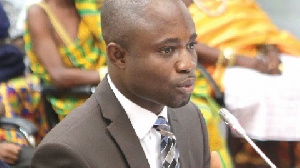 The Ranking Member on the Health Committee of Parliament, Kwabena Mintah Akandoh, says the petition seeking the postponement of the commissioning of ambulances by 22 more days goes to show how much the Akufo-Addo government does not care about the lives of Ghanaians.

He made the statement following news of a move by the Health Minister, Kwaku Agyeman Manu to endorse a petition to have the commissioning of the ambulances postponed even though they been parked at the forecourt of the State House since September 2019.

Speaking to Citi News, Mr. Mintah Akandoh said the situation is becoming appalling as government has not been able to give any tangible explanations for the late delivery of the ambulances.

And they thought that by the 6th of January all these things will have been sorted out. These ambulances have been in Ghana since September. We are in January and they are still citing these excuses and the CEO emphatically started that we had more than 1000 paramedics in the system before they even started importing these ambulances so, why are they behaving this way.

Why are we allowing ourselves to be toyed with like that? Government has not been able to substantiate or give tangible reasons for the late distribution of the ambulances. Don’t they get embarrassed when they are come and tell us some off these things. As Ghanaians, we are not angry enough. The government is taking us for granted,” he said.

In the build-up to the 2016 general elections, President Nana Akufo-Addo and the NPP Government promised to revamp the ailing National Ambulance Service.

In fulfillment of this promise, in September 2019 the first batch of ambulances arrived in the country for all 275 constituencies in the country. However, 96 out of the 275 ambulances are currently parked at the State House awaiting distribution.

A situation that has become worrisome, with many stakeholders calling of government to hasten the process for the delivery of the ambulances.

Despite the numerous calls on government, The Ministry of Health on 3rd January, 2020 pleaded for the postponement of the commissioning of the ambulances that have been parked at the State House in Accra stating that it needs more time to critically assess and conclude technical issues regarding the deployment of the ambulances for effective and efficient emergency response.

This was noted in a letter to the President where Sector Minister, Kwaku Agyemang-Manu also supported the demands by the National Ambulance Service for the distribution of the ambulances to the various constituencies.