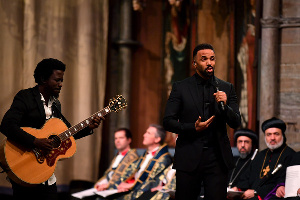 play videoKwame and Craig have a long working relationship.

Last Monday, Ghanaian guitarist, Kwame Yeboah performed for Queen Elizabeth II and other key members of the Royal Family at a commemorative service to celebrate the Commonwealth of nations.

Though it was a solemn church service, it also marked a historic and unbelievable moment for the Ghanaian guitarist who got the opportunity to perform for royalty.

Kwame and Craig have a long working relationship. In 2013, Kwame joined the R’n’B/Garage heartthrob on his 2013 World Tour.

The Ghanaian guitarist has also toured and worked with artists such as Stevie Wonder, Omar, Shaggy among others.

Kwame is also known as the keyboardist and music director for Kojo Antwi.

The 42-year-old is also a part of the Ghanaian Afro-pop band Osibisa.

He has also worked with other Ghanaian musicians such as Becca, Nana Yaa and Efya.

In 2010, Kwame won the Best Instrumentalist award at the Ghana Music Awards.