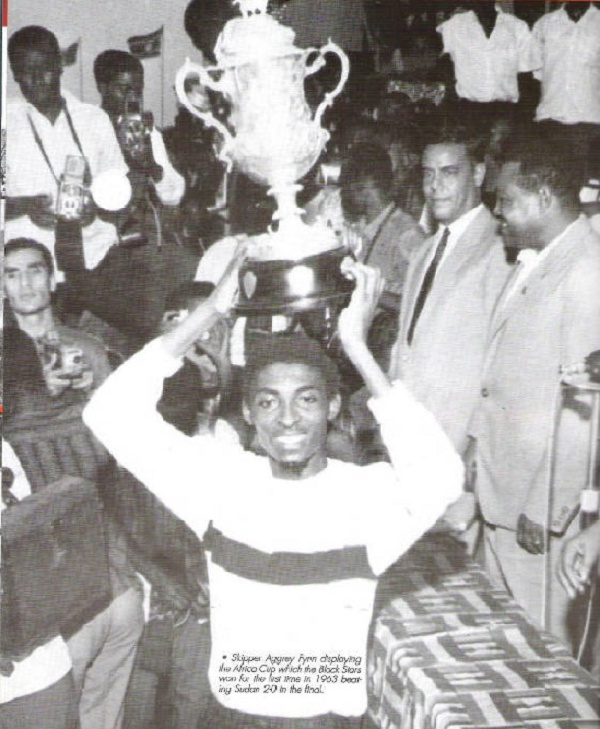 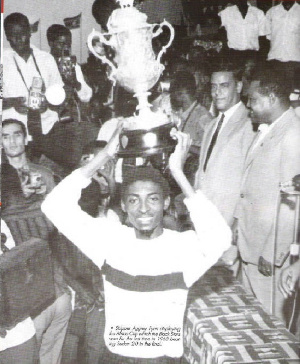 Ghana won its first AFCON on this day in 1963

On this day December 1, 1963 (Exactly 57 years ago today), Ghana won its first Africa Cup of Nations trophy after beating Sudan 3-0 in the final of the 4th edition of the biannual tournament in Accra.

Dr. Kwame Nkrumah realized that there was a need to identify things that would unify the country and instill in the people a sense of pride in the country.

Mass participation in sports presented an arena where a sense of camaraderie could easily be developed.

Football was by far the most popular sport in Ghana and naturally presented a nationwide platform on which a sense of ‘oneness’ could be promoted.

The Central Organisation of Sports (COS) was set up by Dr. Kwame Nkrumah on July 1, 1960, with Mr. Ohene Djan, who was at the time the Chairman of the Ghana Amateur Football Association (GAGA), as director of sports.

The main aim of setting up the Central Organisation of Sports was to promote, encourage, develop and control sports in the country, it was also to exercise final control over the external relations of all forms of Sports in Ghana, encourage and promote competitions between Ghana and international teams.

The Formation of the Ghana Republikan Club:

One of the first acts of the Central Organisation of Sports was to set up the Republikan Sporting Club. This was announced by Ohene Djan on January 23, 1961, on behalf of the president.

The new club, according to the director, was to be at the forefront of reconstruction of Sports in the country and was to be involved in all aspects of Sports in Ghana.

“The director explained that the club was formed on the instructions of Osagyefo President Kwame Nkrumah.”

Football occupied most of the attention of the Central Organisation of Sports. Due to its popularity, the first team to be developed after the formation of the Republikan Sporting Club was the football team, known as the Ghana Republican Club.

On June 12, 1960, in a message to the Annual Conference of the Ghana Amateur Football Association at Ho in the Volta Region, Osagyefo Dr. Kwame Nkrumah hinted at the formation of a model club. Among other things, Osagyefo said;

“My interest in soccer is so keen that I propose in the near future, to encourage the formation of a model club which will offer leadership and inspiration to football clubs in the country.

“This club shall be known a “Ghana Republikan s.” to commemorate the launching of your Three -Year – Development Plan in the year of our Republic.

‘I need not remind you that football is now at the forefront of Ghana. It is in fact our national game.”

As a model club, two players were selected from each team forming the base for an amalgamated Ghana team which won one league title and four 4 consecutive FA Cups.

This team formed a core of the Black Stars team that won the Nations Cup in 1963.

Road to the Final

The Black Stars made their Africa Cup of Nations debut with a 1- 1 draw against Tunisia in the opening match of the tournament on 24 November. Wilberforce Mfum scored Ghana’s first goal in the history of the Nations Cup in the 11th minute, while Mohamed Salah Jedidi equalized for the North Africans in the 36th minute; becoming the first player to score against Ghana in the competition.

Edward Acquah scored two goals as Ghana beat defending champions Ethiopia 2 – 0 in their next match to book their place in the final.

Sudan finished first in their group ahead of Egypt and Nigeria to book a final date with the Black Stars.

Four times champions of West Africa, Ghana ascended the continental throne, after beating Sudan 3-0 in the final of the African Cup of Nations.

After an eventful first half during which there was nothing to choose between the two finalists, Ghana asserted herself and played a more purposeful football in the second half.

And the man who brought life into the game was “little bird” Ofei Dodoo who played a brilliant game after he had taken over from Leonard Acquah in the second half.

The T. U. C. men – Mfum and Acquah pressed hard in the 62nd minute. The Sudanese panicked and in a desperate effort to ward off a typical Black Star attack, a defender of Sudan handled the ball in his own goal area.

Skipper Aggrey Fynn beat goalkeeper Sabit Dodoo with a carpet shot from the spot kick to put Ghana ahead.

Then Ofei Dodoo clicked. He raced through the Sudanese like a jetliner and centered twice for match-winner Edward Acquah to increase the score to 3-0.