Ghana must select players with purpose 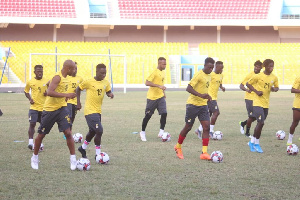 Former Ghana striker Baffour Gyan believes players must have a “purpose” to be selected for national duty if the Black Stars hope to realise their Africa Cup of Nations title ambitions.

The four-time champions have suffered a series of disappointments following their last glory at Libya 1982.

On their last attempt at the 2019 championship in Egypt, Ghana produced their worst performance in the competition since 2006.

“We tried winning it during my playing days but we could not achieve what we were expected to achieve.

“Players must not come to the Black Stars anyhow. We must have the purpose of inviting them to play for the country.

“During our time, we hard senior players that we all looked up to, so before they leave [the scene], we are well trained and acquainted to replace them.

“For me, once we are planning to win the Afcon, this must be taken into consideration and I believe we can win it.”

It has since been one heartache or the other for the Black Stars, though.

At the 1992 championship in Senegal, the West Africans bowed to Cote d’Ivoire on penalties in the final. Four year later in South Africa, the Black Stars went just a step further to pick up bronze.

A semi-final loss to Cameroon at the 2008 tournament on home soil broke many Ghanaian hearts. Ultimately, the Black Stars finished third, a position they just surpassed in 2010 when they finished the tournament with silver.

In 2017, Ghana ended the championship in the fourth position.

After two rounds of matches in the qualifiers for the 2021 Afcon, Ghana lead the table in Group C and are well on course to secure a ticket for the championship.