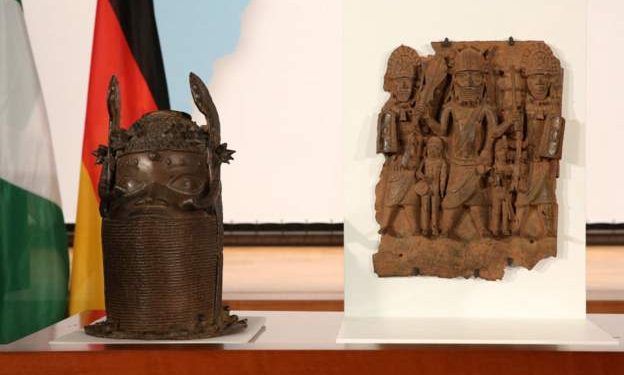 Germany has signed an agreement to transfer ownership of 512 Benin Bronzes, hailed as the largest return of cultural artefacts looted from the continent in the 19th century.

The agreement was signed between the Foundation of Prussian Cultural Heritage (SPK) and Nigeria’s National Commission for Museums and Monuments (NCMM).

The first objects will be returned to Nigeria this year from the Ethnological Museum in Berlin, according to a statement by the foundation.

It added: “Around a third of the objects transferred will remain in Berlin on loan for an initial period of ten years and will be exhibited in the Humboldt Forum.”

The Benin Bronzes consist of thousands of metal sculptures and ivory carvings seized from the West African kingdom of Benin – in what is today Edo State in southern Nigeria – by a British military force in 1897.

Most ended up in European museums after being sold by businessmen and dealers.

In April 2021, the German government said it wanted to give back hundreds of Benin Bronzes.