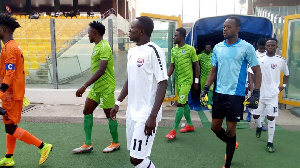 Goalkeeper George Apronti marked his Inter Allies debut with a win against Bechem United on Saturday at the Accra Sports Stadium.

The highly rated goalie made his first appearance for the Elevn is to One Boys after joining the club during the transfer window.

Having joined after the expiration of his contract at Ashantigold, the 24-year old produced a sterling performance to help his new side to a 2-1 win.

Apronti, having seized the opportunity is likely to be the club’s number one goalkeeper following his excellent debut.

Inter Allies showed hunger and desire and grabbed the go-ahead goal in the ninth minute after taking control of the game right from kickoff.

Captain of the day, Victorien Adebayor played Kyeremateng through on goal and he converted facing the goalkeeper one-on-one.

Three minutes before the interval, Allies managed to regain their lead through Adebayor.