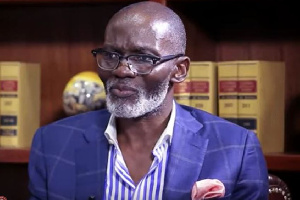 Although he aligns with the Electoral Commission’s reasons for the production of a new voter’s register, especially regarding cost and integrity, leading member of the NPP, Gabby Otchere Darko, is unconvinced about the institution’s decision to do that now.

In a thread of tweets on Saturday, January 11, Mr. Otchere Darko noted his dissatisfaction at the Commission’s attempt to justify the timing of the exercise.

“The EC has made a strong case (on cost and integrity) for a new register. But, for me, concerns about timing still not well addressed,” he wrote.

Earlier today, some members of a group known as the Inter-Party Resistance against the New Voter Register (IPRAN) hit the streets of Tamale to demonstrate against the compilation of new voters register for election 2020.

Notable among the protesters were Minority Leader in Parliament Haruna Iddrisu, founder and leader of APC, Hassan Ayariga, as well as MP for Tamale North, Alhassan Suhuyini.

Several stakeholders, CSOs included, have been divided on the Electoral Commission’s quest to compile a new voter’s register.

Among other reasons, there have been debates about the exercise being a waste of resources.

The Commission further sparked outrage when Director of Elections, Dr Serebour Quarcoo, noted that the elections’ management body will work with its own laid down plans and programmes; that includes compiling a new roll when the need arises.