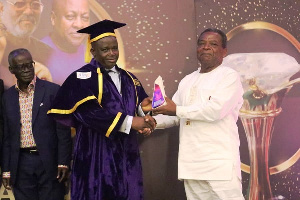 The Executive Chairman and Chief Executive Officer for Rema-Jason Company Limited, Lovers Band, Rema-Jason Ventures, Lotto and Lotteries Company Limited, Dr. Frank Adjei has been honoured for his outstanding contribution to the socioeconomic development of Ghana through the creation of over 100, 000 jobs for Ghanaians, thereby assisting Government to reduce the rate of unemployment in the Country.

Dr. Frank Adjei received his Award at the Movenpick Ambassador Hotel in Accra during the Presidential Globe African Heroes Honours Awards organized by the Pan African Heroes Foundation in collaboration with the Rectitude International Mission and Bureau of Research on Governance, Commerce and Administration.

Dr. Frank Adjei is a very serious Philanthropic and he has touched many lives positively. He provides Scholarships to the needy but brilliant students, supports Churches, Universities, Orphanages and deprived Communities in Ghana.