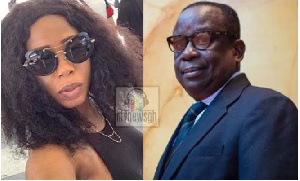 Albert Kan-Dapaah and the alleged side chick Chantelle

It is emerging that a former security capo played a key role in the leaked tape of Minister of National Security, Albert Kan Dapaah, giving credence to speculations the job was indeed executed from ‘within’ the New Patriotic Party (NPP).

The security official together with two others including a serving minister in the current government and one other, were reported to have contracted the lady in question to ‘trap’ the minister.

According to close sources who spoke to MyNewsGh.com that prefers strict anonymity, the motive was to have Kan Dapaah relieved of his post by President Nana Addo Dankwa Akufo-Addo over reasons yet to be ascertained.

This portal understands that the issue of the leaked tape got to the president who after investigations realized it was masterminded within and refused to be swayed by the plot of the unnamed officials to have the respected minister sacked.

It was when all attempts to use the video through the corridors of power to have Kan Dapaah sacked failed that it was leaked to the public in order to force the president rescind his decision on the matter.

Earlier on Sunday, vocal member of the governing New Patriotic Party (NPP) Fadi Dabbousi accused traitors and backstabbers for seeking to run down the presidency, adding that the “mafia prostitutes” being used to carry out the evil should be warned.

“Those behind it tried to make it go viral then, but failed. They tried releasing it in 2019 again, but still failed. They used a different ploy to get Kan Dapaah and failed again. Apparently, their New Year message to Hon Kan Dapaah this time is the resurrection of the video”, he disclosed.