Flashback: NPP has a window of opportunity to fight corruption - Republik City News

Home » Flashback: NPP has a window of opportunity to fight corruption 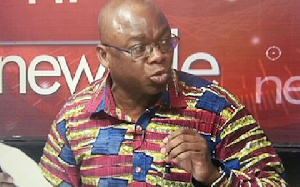 Daniel Batidam, Ghana’s former representative on the African Union Advisory Board on Corruption

Ghana’s former representative on the African Union Advisory Board on Corruption, Daniel Batidam had earlier predicted that the Nana Akufo-Addo led administration has a window of opportunity to fight the growing corruption menace in the country.

According to him, the NPP government has the power to take the fight against corruption further through the feasible implementation of the National Anti-Corruption Plan (NACAP) which was implemented under the John Mahama led administration.

“I call it a window of opportunity for a good reason, technically because those of us in government know that real reforms by new administrations normally take place between the first 18 to 24 months and whatever I expect to see in terms of these reforms in the area of governance should happen within this period and if anything hasn’t happened in January 2019, nothing towards the fight for corruption will fully take place.”

Daniel Batidam who has in the early hours of January 1 passed on after a battle with cancer said this earlier on Joy FM’s PM Express show on December 21, 2016.

The Anti-Corruption campaigner earlier described some developments at the office of the Special Prosecutor set up by the President Akufo-Addo as worrying.

This followed the suspension of a police officer seconded to the office of the Special Prosecutor for allegedly leaking documents.

Daniel Batidam who also served as former president John Mahama’s Advisor on Governance and Corruption called the situation at the Independent prosecutor’s office as dangerous.

“It is worrying that one year after the Special Prosecutor has assumed office, things do not seem to be settled yet and why we were worried about the fact that resources that are needed to get the office properly established are still not forthcoming.

“We are getting in these last few days, incidents emerging from the office which are making the situation a little more precarious in the sense that not too long ago, we heard reports about some staff of the office engaging in some form of theft so to speak that now they were engaged in buying fuel that they were not entitled to and now this information comes up about leaking information. I think this is even more serious and should get all of us worried,” Batidam recounted.