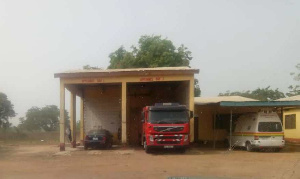 Ghana News Agency investigations has revealed that Fire Tender equipment assigned to the Buipe District Ghana Fire Service office has not been functioning for more than three months now.

The firemen and women called to extinguish the fire on the night of the BOST incident, initially relied on fire extinguishers to douse off the fire.

The Savannah Regional Commander of the Ghana Fire Service, Kwesi Baffour-Awuah who confirmed this with the Ghana News Agency in Buipe on Saturday said the service later took re-enforcements from BOST water hydrants and three Fire Tenders from Tamale and Damango to extinguish the fire which burnt down three tankers completely and one partially.

Besides, one of the three persons who sustained various degrees of injuries has also been discharged from the Buipe Polyclinic leaving one in the same hospital, while the third victim who sustained major burns was rushed to the Tamale Teaching Hospital.

Officials of BOST have arrived from the national capital, Accra, to assess the impact of the accident and present the necessary report for action.