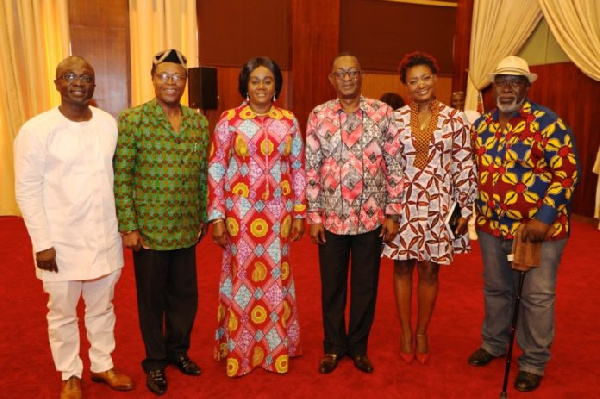 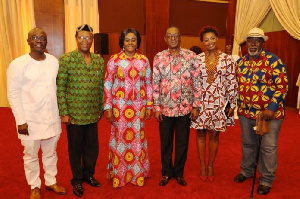 Minister of Tourism, Arts and Culture, Catherine Afeku with some Ghanaian actors

Stakeholders in the film industry have expressed disappointment in the National Film Authority Board for non-fulfillment of the industry’s hopes since they were inaugurated in 2019.

President Akufo-Addo appointed a fourteen (14) member governing board to the National Film Authority and charged them to work hard to make Ghana’s Film Industry globally attractive.

Some filmmakers have called for the dissolution of the NFA Board because they believe their expectations have not been met.

Others have raised lots of concerns regarding the National Film Authority Board and what is expected of them.

Below are some of the concerns:

What’s happened with all the hard work done before her appointment by the Film Task Team Set Up by Hon. Catherine Afeku?

Executive Secretary: Is she exerting too much power and working individually?

President: did he appoint the best for the industry? Was it a political foot soldier satisfaction action he took?

What have they achieved so far? NFA logo

Proposed project: Nickname for the film industry which is in an incubator

Chairman: Is he a tool for manipulating out his own man

Board: do they know what they are and do they matter in the scheme of things

Where would they stand after the Creative Agency/Council gets a Law?

The NFA is expected to advise the Minister of Tourism, Arts, and Culture on matters affecting the film industry and facilitate the establishment of a circuit for the distribution and marketing of locally produced films throughout the country, Africa in general, and the world at large.

The board will also implement policies to promote the use of films for public education on national integration, unity, and cohesion and the mobilisation of the people for behavioural and attitudinal change to enhance national development.

The members of the governing board include actor, David Dontoh as Chairman and Juliet Asante as Executive Secretary.

The formation of the National Film Authority is in accordance with Section 4 (1), (2) of the Development and Classification of Film, 2016 (Act 935).