Home » Ex-wife of Ayalolo Transport PRO accuses him of abuse 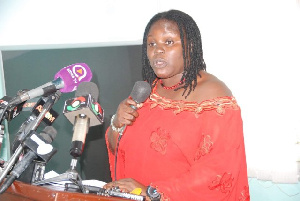 Edith Efua Chidi is the wife of Fred Chidi

“He was the best drug ever. The high of being with him was intoxicating. Nervous butterflies were on a rampage in my stomach, which did a bit of a flip every time I saw him”, was her description of the love of her life.

Contrary to her initial conviction that she had reached her destination when she married Fred Chidi, former News Editor of Joy FM and Citi FM, she only realised that she was stuck in an abusive marriage. It sucked her worth, life, happiness and self-respect.

That is the story of Edith Efua Chidi, co-convener for the Civil Society Organisations (CSOs), Cluster on Decentralisation and Participation.

Detailing her chilling marital experience on her blog, efuachidi.wordpress.com, she narrated the years of pain she endured.

“I was married to a two-faced tomcat, who treated me well when there were people around and switched off into an abusive monster once the cameras are off”, she disclosed.

She wrote about how she was living in constant fear of receiving a good beating if she complained about strangely missing household items, to dealing with her husband’s lover.

This lover of her husband according to her, played an active role in her abuse and torment over the period.

“She taunted and told me how my ‘husband’ didn’t love me and was in love with her. She will let me know anytime my ‘husband’ spent the night at her’s. Chai, the pain and agony I went through… I always thank God laaa” she recounted

However, she was determined to make a better man of Fred, her husband who has the “power of garb that could make a nun renounce her vows”

“I thought I could fix him; save him and offered that man every square inch of warmth in my heart. Instead, he paid me back with scorn, hatred, lies, permanent scars, destroyed my image and badmouthed me to so many of his conquests”, she bemoaned.

She recalled being defamed by her husband to his numerous mistresses of being a violent person which was not the person she was.

“Until he decided to move out to wherever he is gone, my home was open to his colleagues and subordinates. I was called, ‘Vim Mama’ by all. Never have I had a problem anywhere he worked from Citi FM, TV Africa, Kesmi FM, TV3 and even the guys he brought in from Aayalolo… phew, ingratitude at its height!” she lamented.

The man she knew as an alcoholic who mixed his Ativan with “his favourite K20” also made claims that she was a drug addict, she said.

Edith revealed how she was constantly left with a swollen face while bleeding after rounds of beating from her husband.

Amidst all these, she said she never gathered the courage to take legal action against Fred.

She explained “I was made to feel so little and I doubted my capabilities. Yet, I refused to give up. Why? An abusive relationship relies on a power differential between the two parties and the abuser is typically a narcissist or sociopath. And in the long-term, victims of abuse can end up craving affirmation from an abusive partner who has seemingly taken away their self-worth”.

After leaving behind a good-paying job and comfortable life for marriage, Edith said what she got in return were regular split lips or a swollen face.

“I remember Tamale Teaching Hospital, with split lips. This white Doctor did everything to convince me to report to the Police but as usual, my story was ‘I tripped and fell’; with my ‘husband’ standing close and squeezing my hands,” she said.

“Today, I have a permanent headache, three lower-middle tooth ever-shaky, lump in my breast (after being hit by a mop wooden handle) but revelling in peace that’s so unending.”

After leaving their matrimonial home for almost two years, she said she was invited by her husband who she had demanded a divorce from but declined.

He denied her the divorce under the pretext of not being financially fit to facilitate the process, she claimed. However, a determined Edith offered to take up the expenses.

After funding his fuel cost to meet him for a discussion, what happened next was nothing she imagined.

“The man came in and wanted to bang. I said no way in hell and by the time I knew it, a few of my Nubian locks were on the floor, swollen face, shaking teeth, my left breast shot to three times its size and there was blood all over,” she narrated.

She recounted, “I had to lock myself in one of the rooms till he drove off in anger before dashing out to report to the police and sought medical assistance. I agreed to meet him at 37 On-the-run.”

She was introduced to a Bailiff from the Kwabenya Circuit Court who carried a petition containing her husband’s demand for a divorce.

On July 2, Edith was totally fed up with her ordeal which had become a norm. She went straight to the Police to make her report and after that, things took a different turn.

“I listened to my instincts, dashed to the Atomic Police Station to file a report of domestic abuse. That felt liberating, to say the least. And even though, my case was messed up (a story for another day. Reason why most domestic violence victims stay silent), it was a journey worth it. I have reclaimed my self-worth”, she narrated.

Fast forward, she finally divorced Fred and has taken charge of her life, although she still lives with the scars that will remind her of the abusive relationship she was involved in, she said.

“Looking back on 2019, I find myself stronger, more empowered, physically healed and an emotional bulldozer”, she described her current state.

“The past decade was a dark period of my life. The warning signs were there but as a woman in love, I was so blind to even notice; when I did notice, I was too weak to walk away thinking of what society would think,” she said.

Edith is now an advocate for ending violence against women and co-convener for the CSOs, Cluster on Decentralization and Participation.

Myjoyonline.com cannot independently verify Efua’s claim and is making efforts to talk to the Atomic Police where she said she lodged a complaint.

We are also making efforts to talk to Mr Chidi for his side of the story.