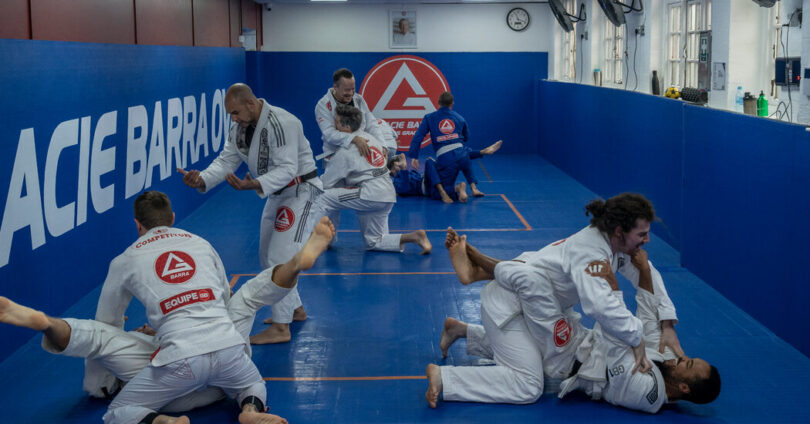 LONDON — The technique is deft and the maneuver swift as the instructor first levers his pupil onto one side, then pivots to leave him prostrate and immobilized on the dark blue mat.

But as the sparring gets underway at this Brazilian jiu-jitsu club in London, its director, Eduardo Carriello, is readying himself for a tougher fight: with the law.

In defiance of coronavirus lockdown rules — and despite six visits from law enforcement — the center has stayed open, and Mr. Carriello insists that doing so is a duty to his members and the wider community.

When Britons first faced tough coronavirus restrictions in March, compliance was high as millions obediently stayed at home, emerging only to shop for food, to exercise briefly or — once a week — applaud health care workers.

Current restrictions are less stringent than in March (schools and universities are open), but in a country with one of Europe’s highest Covid-19 death rates, Prime Minister Boris Johnson says they are vital to prevent the National Health Service from being overwhelmed.

Midway through the new lockdown in England, though, support is more patchy and the consensus is fragmenting as more people come around to Mr. Carriello’s point of view.

“I have no problem being arrested,” Mr. Carriello said. “I am not committing a crime, I’m just exercising my rights.” A fourth-degree black belt who arrived in London from Brazil 18 years ago with little money and not much English, he now runs the newly refurbished Gracie Barra club at the Oval in south London.

Brazilian jiu-jitsu helps those suffering from depression, mental illness or stress, he said, though, despite his obvious physical fitness, Mr. Carriello now knows about extreme anxiety.

“I have never been so stressed in my entire life,” he said, reflecting on the repeated visits from the authorities and adding, “If they extend this lockdown we are going to have a civil war.”

The resistance is not confined just to gyms, which are supposed to be closed to adults until the scheduled end of the current lockdown on Dec. 2. In recent weeks fines have been issued to hundreds of Britons, including people partying on a moored boat in Liverpool and seven women caught traveling in a stretch limousine in the West Midlands.

Rebel gym owners say they are staying open on principle and to help people stay healthy, rather than for financial reasons. Many worry that curbs on them will continue after Dec. 2, at which point regional Covid-19 rules may return, potentially keeping some businesses shut. Mr. Johnson is expected to give more details on his plans this week.

According to one set of official figures, gyms rank below secondary schools, pubs and restaurants and supermarkets (but above care homes and universities) as places identified as a possible source of infection. In fact, fitness centers vary hugely in terms of available space and ventilation, though participants in martial arts classes are unlikely to observe social distancing.

In the United States, gyms in many areas have been allowed to remain open, although some states have placed limits on their operations. In New York City, gyms are open with restrictions even though schools have been closed, generating anger among some parents.

In England, because responsibility for enforcing the lockdown is split between local municipalities and the police — and Covid-19 regulations give neither an automatic right to enter property — some gyms have played a cat-and-mouse game with the authorities, keeping them at bay and disputing legal orders.

Some have overplayed their hand, however, perhaps spurred on by social media posts erroneously suggesting that they can cite common law or even Magna Carta of 1215 (the medieval document that inspired protections for cherished liberties) to resist the power of the state.

“The highest daily number of positive Covid cases was recorded in the U.K. last week, and we had to make it clear that everyone has to work together and follow the legislation put in place to contain the spread of the virus,” said Joseph Ejiofor, leader of Haringey Council, which includes Wood Green.

“I understand why the owner felt passionately about staying open, but the law is the law and it applies to everyone,” he added.

Yet some legal experts are not quite so sure. They worry about confusion around the law, uneven enforcement of regulations and suspicions that young men from ethnic minority groups have been disproportionately targeted by the police for minor lockdown breaches.

“Whilst I wouldn’t recommend trying to use Magna Carta to keep your gym open, there has been huge inconsistency in the enforcement of these regulations,” said Adam Wagner, a civil liberties lawyer whose podcast has recently focused on the Covid-19 rules.

This, he added, was “partly because the police don’t always understand their powers and partly because there seems a bit of skepticism within the police about using powers that are difficult to interpret and keep changing. So while some seem to have almost given up, others are going in hard.”

Gym owners who have experienced the harsher tactics include Michelle Meade-Wyatt, owner of Ripped Gym in Harlow, north of London, whose arrest was captured on a cellphone video.

Ms. Meade-Wyatt concedes that she made herself something of a target with her open defiance. “I effectively said, ‘I don’t believe this lockdown is legal and I am staying open,’” she said.

Still, she feels a sense of bewilderment after joining a demonstration against lockdown measures in Liverpool, where she lives, and being arrested again.

“I am a law-abiding businesswoman, I am 45, but I’ve been arrested twice in 10 days and I’m spending time sitting in police cells,” she said.

Hannah Lanel, founder of The Fore Fitness and Wellness Studio in north London, has deployed lower-key tactics. On one occasion she tried unsuccessfully to convince officials that, since her fitness studio occasionally sells plants, it could be treated as a garden center that can stay open under lockdown rules.

“If you are not sure of your position, you are going to be intimidated into closing,” she said. Having been served a formal notice to close, she is now looking at other routes to stay open, like acting as an educational provider.

But, like many other gym owners, she believes that fitness and sports centers should be allowed to stay open because they help the nation’s health, and combat obesity, which is a risk factor for Covid-19.

Those who seem to agree include around 20 martial arts students, each wearing a garment known as a gi, who attended two Brazilian jiu-jitsu classes on one recent morning in support of Mr. Carriello’s act of rebellion. Some talk of how the activity helps their mental health; others see their attendance as an expression of individual freedom.

After an energetic warm-up, a lesson and some sparring, Thorstein Thorsteinsson, 54, a realtor originally from Iceland, said he recognized the threat from Covid-19 and wanted to protect the vulnerable, but thought people should be able to make their own assessment of risk.

He worries about the loss of liberties from lockdown laws while acknowledging that it is unusual to spend a martial arts lesson resisting the law, as well as an opponent.

The possibility of the class being interrupted by the police does not deter him, however.

“If it happens, it happens, and if they want to arrest me or other people they will do so,” he said.