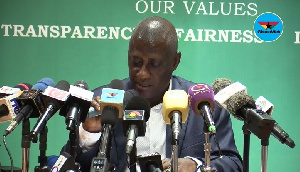 The Electoral Commission has said the new voter registration is meant to ensure appropriate and meaningful use of technology to safeguard the efficacy of the ballot count and the acceptance of results.

According to the Commission, the quality of the voters’ register played a critical role in the electoral process and an obsolete and incomplete register could not be relied on for an electoral process, which guaranteed the principle of one man, one vote.

The Commission stated that the acceptance of results among stakeholders was dependent on how accurate and efficient it identified people and correctly eliminated voter fraud.

Addressing the media on Tuesday in Accra, Mr Samuel Tettey, Deputy Chairman-in-Charge of Operations noted that the country started using biometrics in its elections and had, become an important tool for voter identification and verification.

He said in a tensed political climate, where there was a total lack of trust among parties involved in the electoral process, biometrics cannot be an adequate enabler if it is not up-to-date and responsive.

“Its solutions must be complete and comprehensive to render the electoral process reliable, credible, transparent and trustworthy,” he said.

“The IT infrastructure, that supports this biometric voting management system must be modern, secure, reliable, robust and have the necessary performance features to meet tight electoral timetables and demanding service requirements”.

The Deputy Chairman current system in place simply cannot meet the requirement to support the 2020 general election and beyond.

He stated that the server, storage and networking hardware at the Data centres on which BVMS applications run on were all obsolete and have reach “end of life” and “end of support”.

“Their component parts now frequently breakdown and parts to repair them are unavailable because the manufacturer no longer produces them or supports them,” he said.

“As a result of the above, the cost of maintenance of the equipment has reached unsustainable levels. Price quotation offered by the existing vendor for the refurbishment and upgrade of existing system was as high as getting a completely new infrastructure (both hardware and software) in place”.

Mr Tettey noted that the cooling units within the two Data centres were breaking down often and resulting in the datacentre having to be shut down on several occasions.

He said it was also realised during the handing over the process from the previous vendor that there was no disaster recovery or business continuity system in place should there be a major disaster at the production Datacentre.

According to him the data backup system, in place at best effort, which meant that system was essentially frozen so no entries could be made into the system took a minimum of four days to complete.

He stated that the current Biometric Verification Devices (BVD) were unable to verify candidates electronically which lead to high incidence of manual verification.