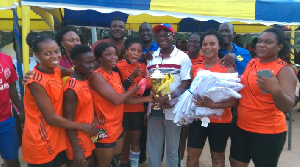 The Eastern Regional Volleyball Association has presented a citation to two volleyball referees in recognition of their contribution to the development of the game and dedicated service to the association over the years.

The two were said to have devoted their time to ensure that they officiate at every match venue when the association run short of referees in the region.

The contribution of the two to the promotion and the development of volleyball in the region was selfless and worth emulating because they discharged their duties without fear or favour irrespective of the challenges.

The citation was presented to them at the close of the finals of the 2019 Akro-Ako Eastern Regional Volleyball league played at Akosombo.

In a citation presented to the two, it read, when the association fell short of men, you devoted your time to Eastern Region Volleyball Association, you stood tall and unshakeable.

When everyone was reluctant to sacrifice their time and resources, you became our relying point indeed.