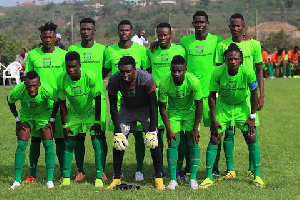 Legon Cities FC managed to pick a point at the Theatre of Dreams Stadium in Dawu, at the jaws of Dreams FC to draw goalless in the week three fixture in the ongoing Ghana Premier League (GPL).

The first half produced little chances, however, it was the host team that created the best opportunity when their right-back Philemon Baffour drove a low shot to hit the goal post in the 16th minute.

As the match was getting tensed, Legon Cities FC defended Stephen Bonney received a yellow card for fouling Sulemana Mohammed of Dreams FC.

Legon Cities FC player Sulley Sadick was not lucky as his long-range shot was saved by the Dreams FC goalkeeper Peter Sarkodie as both teams failed to find the net in the first half.

The second half began with the away side pressing harder to take the lead which saw them make two quick substitutions, with Daniel Oppong going out for Nicholas Mensah and Stephen Bonney for Ahmed Rahman to strengthen their attack.

The home team then made some substitutions with Ahmed Dantani being replaced by Okraku Prince and later Abdul Bashiru come in for Issah Ibrahim.

However, the substitutions could not produce the magic as the game was still a deadlock.

Legon Cities FC then lost their goalkeeper Fatau Dauda to injury and he was replaced by Prosper Gbeku.

However, the second-half substitute for Legon Cities FC Nicholas Mensah saw a yellow card for a bad tackle.

Dreams FC then made their third substitution by taking out Patrick Arthur and bringing on Cletus Daho to strengthen their team.

The brilliance of Legon Cities FC player Abdul Karim nearly paid off when he drove in a long-range from the middle of the pitch but the Dreams goalkeeper ensured that no ball entered his net.

The NASCO man of the match was given to Legon Cities playmaker Jeffery Degorl for his outstanding show in the match.