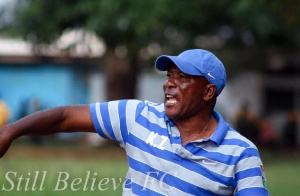 Head coach of Dreams FC Abdul Karim Zito has been charged by the Ghana Football Association(GFA), for misconduct following his side’s 1-0 defeat to Hearts of Oak at the Theater of Dreams on Sunday.

The veteran trainer has been accused of making disparaging remarks against the match officials for their performance after his side suffered a painful home defeat in the hands of the Phobians.

Zito, in his post match press conference questioned the performance of the match officials claiming his side was clearly denied a penalty call after Eric Gawu was pulled down in the Hearts of Oak 18-yard box few minutes to the end of the game.

“Eric Gawu went ahead with the ball and the defender pushed him down. I saw a penalty. We are being punched by certain things,” Zito said.

“They should leave us to play our game. This has been happening in most of our away games.

“Because the FA President (Kurt) was a director of the club, the referees fear they will be accused if they give us the right decisions,” he puffed.

Following these comments, Zito has been charged for making disparaging comments against the match officials.

He has also been charged for using abusive language against the match officials that has impugned their integrity and competence.

If found guilty, the former Asante Kotoko and Hearts of Oak gaffer will be suspended for a game and pay a fine of up to ?5000.

Zito has until Wednesday 5th February to appeal the decision.