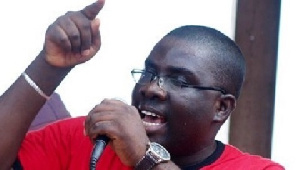 National Organiser of the New Patriotic Party(NPP), Sammy Awuku has asked those in the NPP fold who are incensed by some prophecies that predicted defeat for President Akufo-Addo to be patient and rather work harder towards achieving victory in the upcoming elections.

In a reaction to the fall out from the barrage of Prophecies from the 31st Watch Night Service, Mr Awuku said:”let’s not be infuriated by the few Prophecies that predicted an unexpected outcome for the President and our would be Flagbearer for 2020. It is only meant to test our resolve and determination to achieve another feat.”

The yearly ritual of prophecies on 31st Watch night services saw in the past 72 hours several political predictions on the altar of famous prophets in the country.

Some Prophets including Nigel Gaise prophesied that Kwame Dramani, who’s undoubtedly the Flagbearer of the NPP will win for the National Democratic Congress if they put their house in order.

Prophet Owusu Bempah, and Bishop Elisha Salifu Amoako, who doubles as the Founder and General Overseer of Alive Chapel International,on the other hand, prophesied victory for the ruling NPP in this year’s election.

He added:”To my NPP Patriots, let us not get too swayed and complacent with the many prophecies that predicted an emphatic victory for the NPP in 2020 but instead let it serve as a motivation to move beyond our comfort zone to support the Party and Government to communicate the extraordinary achievements of President Nana Akufo-Addo led administration within the past 3yrs of being in charge of the destiny of our beloved Country.”