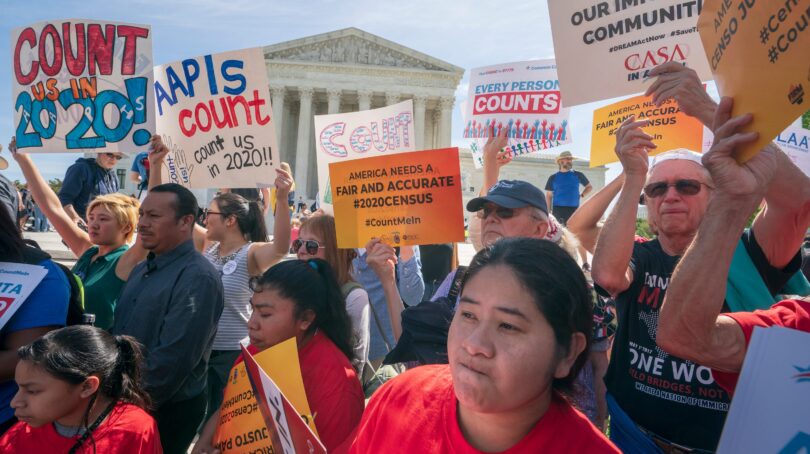 The USA TODAY Network presents “The Wall,” a massive project aimed at putting a microscope on our border by letting you hear from migrants, border agents, ranchers, farmers, smugglers, families, and residents about what life is like along this politicized region.

WASHINGTON – President Donald Trump is ending his tumultuous time in office the same way he started it: cracking down on immigrants and asking for help from the Supreme Court. But this time, his motive is more political than ideological.

The president is seeking to exclude undocumented immigrants from census calculations used to apportion House of Representatives seats and electoral votes, a policy that also could impact the distribution of federal funds. The high court will hear oral argument in the case Monday and has promised to rule by the end of the year.

If the justices hand Trump a lame-duck victory – or even if they just vacate a federal district court ruling against him – the result could be a loss of House seats in traditionally “blue” states, led by California.

Trump has had only limited success defending his immigration policies at the high court. It took three tries for the justices to uphold his ban on travel from a handful of predominantly Muslim nations. Other restrictions aimed at deterring poor immigrants, blocking asylum-seekers and building a wall along the southern border have won temporary reprieves.

Meanwhile, his efforts to end an Obama administration program protecting young immigrants from deportation and to add a question on citizenship to the 2020 census were struck down in 5-4 rulings written by Chief Justice John Roberts.

More: Trump’s defeat may give Supreme Court a rest from personal, policy lawsuits

Now Trump is waging what could be his final Supreme Court battle without some traditional allies; Catholics, conservatives and constitutional experts have opposed the policy. After three losses in lower courts and with even the Census Bureau balking, it appears to be a long shot.

“This is a way to try to tilt the electoral map for the next decade on his way out the door,” said Dale Ho, director of the voting rights project at the American Civil Liberties Union, who will oppose the administration in court.

The justices agreed to hear and decide the case quickly because time is running out on the 2020 census process. Commerce Secretary Wilbur Ross’ report to the president is due Dec. 31. Trump has 10 days after that to report to Congress on the number of House seats allocated to each state.

In concrete terms, the dispute pits states against each other for those seats, along with electoral votes and potentially billions of dollars in federal aid. Under Trump’s plan, states with the highest percentage of undocumented immigrants face the greatest risk. Most of those states, from Nevada to New Jersey, lean Democratic.

In broader policy terms, the case puts one last exclamation point on the Trump administration’s more than 400 policy changes aimed at shrinking both legal and illegal immigration channels into the United States. When challenged, it has sought Supreme Court backing for its agenda, including efforts to restrict asylum-seekers, refugees and migrants dependent on public assistance.

Trump’s not-so-secret weapons on the court include three justices confirmed during his watch: Neil Gorsuch, Brett Kavanaugh and Amy Coney Barrett. But the court’s conservatives put special emphasis on the Constitution and the text of federal statutes, and those call for all persons to be included in the census count, regardless of immigration status.

“Nothing in the text or history of the Constitution or Census Act suggests that (the Trump administration) may treat millions of people who undisputedly live here as if they were not here,” New York Solicitor General Barbara Underwood argued in court papers.

Immigration activists demonstrated outside the Supreme Court in 2019 as the justices heard arguments on the Trump administration’s plan to ask about citizenship in the 2020 census. (Photo: J. Scott Applewhite, AP)

Trump ignited his latest immigration battle in July with a memorandum directing the Commerce Department to conduct a second census count, one that excludes undocumented immigrants when it comes to apportioning the 435 seats in the House of Representatives.

Led by New York, a coalition of 22 states and 15 cities filed suit, and a federal district court ruled in September that it was unlawful. The three-judge panel said it served to deter immigrant households from responding to the census count. Since then, two other federal courts in California and Maryland issued similar rulings.

Last month, the Supreme Court let the administration end its 2020 census count earlier than planned, a move it sought in order to finalize the census before Trump leaves office. That could render moot the lower court’s reason for hearing the case and prompt the high court to vacate its ruling. What’s more, the Census Bureau has said it needs more time to review, process and tabulate data.

Part of the problem stems from the administration’s earlier loss at the Supreme Court, when it sought to ask about citizenship on the census questionnaire. That has made it more difficult to count noncitizens using other government records.

In court papers, Acting Solicitor General Jeffrey Wall said the Constitution’s reference to counting “persons in each state” means inhabitants, and not necessarily immigrants living there without permission. Nine allied states led by Louisiana said counting undocumented immigrants “dilutes the relative weight of a person’s vote in a district that does not contain” many of them.

“You end up giving to Californians and New Yorkers more representation per capita than people who live in Ohio or Mississippi,” said Christopher Hajec, director of litigation at the Immigration Reform Law Institute, which advocates for tighter border policies.

But the ACLU, which will argue against the policy in court alongside New York, said that by counting all persons, the framers of the Constitution sought to resist “manipulation” and “political chicanery.”

Other groups that filed legal papers were more blunt. The NAACP Legal Defense and Educational Fund accused the administration of trying to “undermine political representation of Black people and other communities of color.”

A coalition of Catholic groups said the policy “sends a message that (undocumented immigrants) are not equal members of the human family.”

And a group of census historians called the decennial enumeration “a measure of population, not political membership.”

Demonstrators gathered outside the Trump Hotel International in Washington, D.C., during a January 2017 protest of an executive order barring the citizens of Muslim-majority countries Iraq, Syria, Iran, Sudan, Libya, Somalia and Yemen from traveling to the United States. (Photo: Zach Gibson, Getty Images)

The Supreme Court has been an unreliable last resort for Trump’s efforts to restrict immigration.

It took three versions before the justices in 2018 upheld the president’s long-promised ban on travel from majority-Muslim countries deemed to be security risks. Trump signed an executive order in January 2017 that included seven such nations, but it was shot down by several federal courts. A second ban also was blocked, but the Supreme Court ultimately upheld a third version that included five such countries.

Trump’s luck at the court turned last year, when Roberts wrote the 5-4 opinion blocking his plan to add a citizenship question to the 2020 census. The chief justice sided with the court’s liberals, as well as challenging states and immigrant rights groups, in calling the reason for the query “contrived.”

Then this year, Roberts authored another 5-4 ruling that blocked Trump from ending the Deferred Action for Childhood Arrivals (DACA) program, which allows some 650,000 young, undocumented immigrants to live and work in the U.S. without fear of deportation. He called Trump’s plan “arbitrary and capricious.”

Trump’s signature campaign promise was to build a wall along the U.S.-Mexico border, but he met resistance from Mexico, Congress and the courts. Eventually, the Supreme Court approved the use of $2.5 billion in military funding for a portion of the wall. Another challenge is set to be heard early in 2021, but President-elect Joe Biden could stop construction and render it moot.

Another Trump immigration policy slated to be heard by the court early next year forces migrants seeking asylum to remain in Mexico while their applications are pending. Like most other immigration policies, it was struck down by lower federal courts, but the rulings were blocked while the policy remains in effect.

The administration has won some disputes along the way. Last year, the high court allowed it to deny asylum to migrants at the southern border who did not seek protection from another country first. And this year, it let the administration block thousands of immigrants from gaining permanent legal status, or green cards, if they are likely to need public assistance.

But on his way out the door on Jan. 20 and having lost one census case already, Trump likely will face a tough audience when the court hears his latest challenge over the phone amid the COVID-19 pandemic.

Trump “is just sort of playing to the GOP base, which really hates undocumented immigrants,” said Ilya Somin, a libertarian law professor at George Mason University in Virginia. “I think it is an uphill case for the administration.”