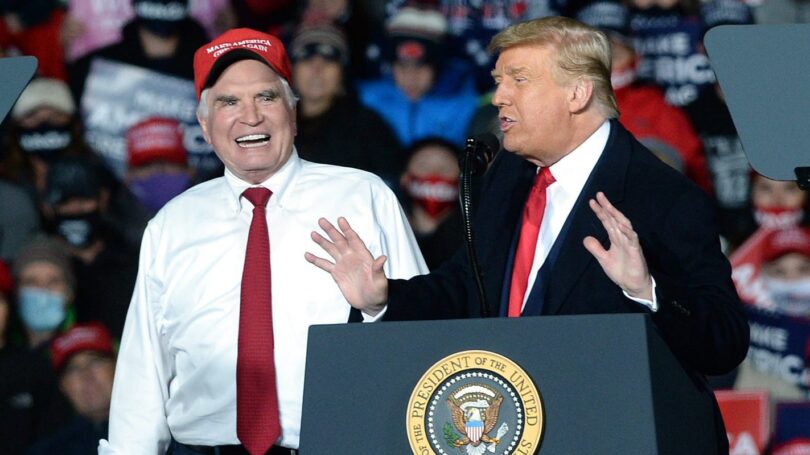 WASHINGTON – A long-shot effort to overturn the presidential election results in Pennsylvania made its way to the Supreme Court Tuesday.

Conservative Rep. Mike Kelly, R-Pa., and others contend state officials had no right under the Pennsylvania Constitution to expand mail-in voting in 2019, and the state Supreme Court was wrong to uphold that statute. The group called it “an unconstitutional, no-excuse absentee voting scheme.”

“Pennsylvania’s General Assembly exceeded its powers by unconstitutionally allowing no-excuse absentee voting, including for federal offices, in the election,” the challengers argued in court papers. As a result, the election was “conducted illegally.”

The group seeks an emergency injunction from the nation’s highest court to block the completion of any remaining steps in the state’s certification of Pennsylvania’s 2020 election results, which took place last week. The petition was submitted to Associate Justice Samuel Alito.

There are several reasons why the high court is unlikely to look kindly on the petition. The justices are disinclined to overrule state, rather than federal, courts. They are even more unlikely to disenfranchise millions of law-abiding voters. The challengers could have filed suit when the state law passed but waited a year, until their preferred presidential candidate was defeated, to take action.

The state court case was filed Nov. 21, more than two weeks after Election Day and about a year after the Pennsylvania General Assembly approved what’s known as Act 77, a major overhaul of the state’s election code. The change included the first authorization of wide-scale mail-in voting in the state’s history.

This year’s presidential race marked the first time the changes were in effect for a Pennsylvania general election.

The original petition, filed with the state’s Commonwealth Court, argued that the mail-in voting provision violated the state’s constitution.

“Under the Act, and the mail-in ballot scheme it implements, any and all qualified electors are eligible to vote by mail, and no justification needs to be provided,” the petition argued. It characterized the change as “another illegal attempt to override the limitations on absentee voting prescribed in the Pennsylvania Constitution, without first following the necessary procedure to amend the Constitution to allow for the expansion.”

The group asked the court to declare the change in violation of the state constitution and issue an injunction to bar certification of Pennsylvania’s 2020 election results, or to require any already-approved certification to be rescinded.

As an alternative, the group asked that the Pennsylvania General Assembly be authorized to name the electors to the Electoral College, which will cast ballots later this month in the presidential contest.

Gov. Thomas Wolf, a Democrat, certified Pennsylvania’s election results three days after the petition was filed. The certification showed that Biden beat Trump in the state by a 80,555-vote margin.

Commonwealth Court Judge Patricia McCullough issued a Nov. 25 order that preliminarily blocked any remaining action on the state’s election certification. In a legal memorandum issued two days later, McCullough said Kelly and the other petitioners appeared to have established “a likelihood to succeed on the merits” because they “have asserted the (Pennsylvania) Constitution does not provide a mechanism for the legislature to allow for expansion of absentee voting without a constitutional amendment.”

The state’s highest court vacated McCullough’s order halting certification of the election results and dismissed the case on Saturday. However, the ruling did not focus on the state constitutional challenge.

Instead, the court’s unsigned order, joined by the entire court of five Democratic and two Republican justices,ruled that Kelly and others had waited too long to challenge the election system overhaul.

“The want of due diligence demonstrated in this matter is unmistakable,” the ruling said. Equally clear, the court added, was the potential impact of the delay in filing the lawsuit, “as such inaction would result in the disenfranchisement of millions of Pennsylvania voters.”

In a concurring statement, Justice David Wecht noted that several of the petitioners participated in primary races under the election overhaul “without complaint,” and subsequently “play a dangerous game at the expense of every Pennsylvania voter.”

“It is not our role to lend legitimacy to such transparent and untimely efforts to subvert the will of Pennsylvania voters,” added Wecht.

While Chief Justice Thomas Saylor agreed with the decision, he wrote separately to say that the underlying challenge “presents troublesome questions about the (state) constitutional validity of the new mail-in voting scheme.”