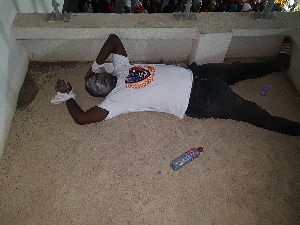 The action-packed match which ended 3-1 in favour of the visitors, Kotoko, was played under floodlights after the National Sports Authority (NSA) lifted the ban on evening matches following the infamous May, 9, 2001 stadium stampede which resulted in the death of 126 spectators after a match between Accra Hearts of Oak and Kumasi Asante Kotoko.

One of the supporters of LCFC who could not stand the shock of defeat, was captured in a photo lying on the floor at the Upper VIP stand right after Emmanuel Gyamfi netted the 3rd goal for Kotoko on the 60th minute.

The man, who had powder on his face, had earlier predicted a 2-1 victory in favour of the Legon-based side which scored first in the 8th minute and dominated the game in the first period.

Things changed when Kotoko equalised 11 minutes before halftime and followed it up in the second half with two more goals to extend the tally to 3-1, a situation some Legon Cities supporters found very hard to believe.

However, further checks by journalist, Lord Kweku Sekyi revealed that the fan who was captured lying on the floor was able to wake up by himself 5 minutes to full time to join his colleagues at the Lower VIP stand.

The well-attended match, which many described as one of the most exciting league matches in the last decade, recorded no serious incident.

Another notable moment was recording artist, Shatta Wale’s halftime performance, which had supporters of both teams singing along to some of his popular songs.

Ghanaian comedian, Baffour Kyei Akoto a.k.a Togo Borga, described the atmosphere as one of the most pleasant moments in Ghana Football.

“My only disappointment is that Legon Cities FC lost to Kotoko, aside that, I am very impressed with the organisation as well as security and other emergency arrangements.

“For the first time in many years, I saw parents bring their children to watch a Ghana Premier League match together at the stadium, and everybody feels safe,” he said.

He called on Ghana Football Association (GFA) President, Kurt Okraku to ensure that all domestic league matches are promoted well to attract football lovers to attend matches every week.