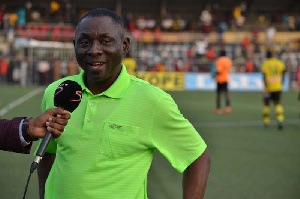 Coach David Duncan has called on Hearts Oak fans to exercise patience while management works hard to return the club to its glorious days.

Duncan’s comments come after the club’s shambolic start to the on going 2019/2020 Ghana Premier League season which has seen them suffer two defeats in a row.

The Rainbow Family lost 1-0 to Berekum Chelsea at home in their opening game and a 0-3 to Medeama SC away subsequently.

The club is currently without a substantive head coach after sacking Kim Grant after the first game, with Coach Odoom holding the fought now as the interim manager of the club..

In an exclusive interview with Angel FM, Duncan opined that,

“ The supporters of Accra Hearts of Oak should exercise patience for the club in the on going league. Hearts will surely bounce back with the new signings they’re trying to bring on board”

Hearts of Oak will host Mysterious Ebusua Dwarfs in the match day three of the Ghana Premier League on Sunday at the Accra Sports Stadium.