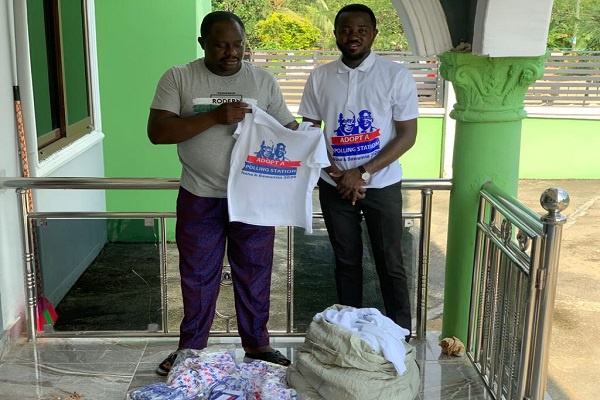 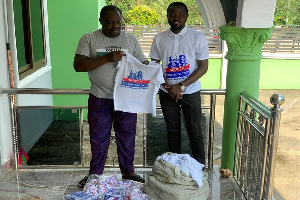 Former SRC President of the University of Ghana, Daniel Otting Awuah has donated some branded campaign items to Emmanuel Adei Domson, Parliamentary candidate for the Asikuma Odoben Brakwa Constituency in the Central Region.

According to the former student leader and youth activist, this donation will facilitate a convenient process in securing victory for the parliamentary candidate in the upcoming parliamentary elections.

He also believes that his personal support to the campaign will also enhance efforts in securing another term for President Nana Addo Dankwa Akufo-Addo.

In an interaction with the aspiring Member of Parliament at his Asikuma residence, Mr. Otting Awuah encouraged the parliamentary candidate for doing a great job during his tenure as District Chief Executive (DCE) and the campaign.

He also called on other well wishers and youth groups to contribute massively in their own way to secure another term for the President and the seat for the parliamentary candidate. He believes these individuals are the best bet for continuity in development.

Adjei Domson also appreciated his time and efforts every week in the campaign and further admonished him to adopt a village in the constituency and strategise to make an impact.

To this, the young politician and student leader agreed that he and his group will adopt the village of Wansabiampa in the Breman Bedum zone to campaign and make an impact for President Nana Addo Dankwa Akufo-Addo, the parliamentary candidate and the NPP.