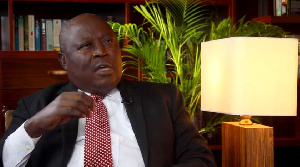 Special Prosecutor Martin Amidu should have made a bigger headline than he did recently when he reminded those who heard him about the days when the rule of law fled through the window.

He might not be nostalgic about those dark chapters in our annals but perhaps just trying to get busy.

Announcing about the progress he has made in his efforts to prosecute those who dipped their hands into the state’s kitty could have earned him banner headlines across the broad spectrum on Ghanaian newspapers.

His portentous notice was not a welcome one. He has announced going for information about how individuals in both public and private lives made their fortunes, monies specifically, and that for us and others is crossing the red line.

Getting busy-bodied about nothing is not what Ghanaians want to see happening in the Special Prosecutor’s Office at this time. Many for good reasons would have expected so many things regarding prosecuting genuine cases of causing financial loss to the state and double remunerations by persons who are serving as Members of Parliament.

That has not happened and we do not know whether he would adduce a new set of reasons he has not made headway. We are waiting to see whether these would be convincing if he bothers to lay these out his usual long essays.

His decision to turn to individual accounts is most reprehensible. We are tempted to believe that he is just kidding and has no real appetite to do that.

Any action which seeks to peep into the accounts of individuals or corporate entities in our financial institutions would be counter-productive in many dimensions. This crude tangent belongs to the junta days of the military regimes. Antiquated as they are, he should not dare because Ghana has moved on.

Any action which would encourage Ghanaians to rethink keeping their monies with banks calls for actions for Ghanaians.

Surprisingly, nothing has been said about the announcement by the Special Prosecutor in both mainstream and social media.

We want as many Ghanaians as possible to open accounts and not to consider saving their monies in buried pots on their compounds.

Martin should spare us such scary memories of ‘we no go sit down’ days. Those who make illegal monies should be stopped in their tracks not when such wealth has been accumulated.

State institutions charged with the responsibility of ensuring ‘bad monies’ are not allowed in the country should be encouraged to do their work diligently and efficiently. That is the way to go and not Martin Amidu screaming about applying PNDC days’ standards in a country ruled by law.